This piano ornament is written as a small note (a grace note), which is placed one step above or under the principal note.

There are two main rules that explain how to perform it:

1. It is played on the beat.
2. It takes half the time of the following note (the principal note).

In this example the principal note is C and the appoggiatura is D.

How do we apply the second rule?

What do we get?

Let's see more possibilities and the way they should be performed: 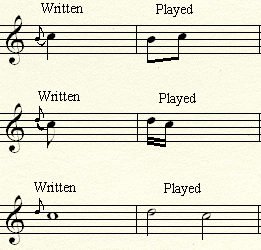 Here is a famous example which will clarify this: 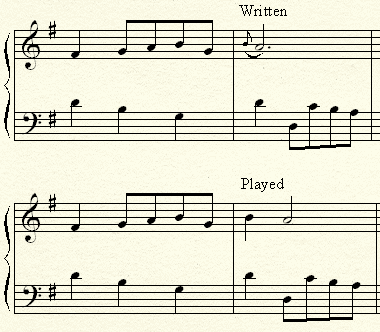 In this minuet in G by Bach it sounds much better when the ornament lasts one quarter only, and the principal note takes two quarters. Try playing it and you will hear for yourself...
(Click here to download the whole minuet in G by Bach.)

In many types of ornaments I recommend ignoring them until you can play the whole piece fluently. However, as the appoggiatura has an important role in the melody, I usually ask my students to play it.

Return from The Appoggiatura to Piano Technique