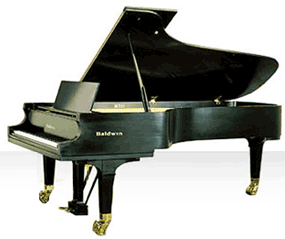 These pianos are of the finest and the most popular brands in the world.

The Baldwin Company has produced an enormous number of different models from a variety of types- from the smallest upright piano to the grand concert piano.
Their different pianos serve all levels of pianists - from beginners to professionals.

How and when did all start?

The Baldwin Company is named after Dwight Hamilton Baldwin who was born in Pennsylvania in 1821. He was a violin and organ teacher and in 1862 he opened a music store in Cincinnati, Ohio. Thirty years later, in 1891 the first Baldwin upright piano was introduced. In 1895 the first Baldwin grand piano was unveiled, and since then a variety of models were produced and distributed in the U.S.A. and all over the world.

When Dwight Hamilton Baldwin died in August 23, 1899, his partner, Lucien Wulsin took over the company. Nevertheless, the name Baldwin has still remained. Many internal changes in the company were made through more than 100 years and in 2001 the Gibson Guitar Corp. bought the Baldwin Company. Still, the pianos are manufactured under the Baldwin name.

Other brands owned by Baldwin:

Here is something interesting you should know...

During the World War II, Baldwin built wooden aircraft wings and other aircraft parts too with maple. This experience was the basis of their 41-ply (!!) maple piano pinblock.

Return from Baldwin Piano to Buy a Piano