This scale divides the octave into twelve semi tones.
Therefore the distance between each note of the scale and its neighbor would be half a step.

Usually each scale could be transposed to all different keys, but since the scale contains only half steps it doesn't really matter where you start playing the scale.
It all sounds the same.

In other words there's only one chromatic scale.

When we ascend we will notate the scale with sharps.

When we descend we will notate the scale with flats.

The scale is often used in music to express drama. Moving from one semitone to other creates a dramatic effect.

The leading tone is just a half tone under the tonic. It is named so since the semitone movement is very dominant. Now imagine a whole scale moving only in half steps.

The "flight of the Bumblebee", a famous orchestral interlude written by Nikoli Rimski-Korsakov is a wonderful piece which demonstrated the power of the chromatic movement. 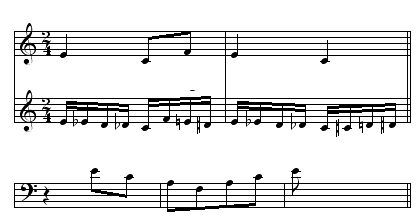 Since the scale consists of only half steps it stand as contrast to any diatonic scale and actually to the essence of tonal music.

In other words since the scale can start from each and every key it would be honest to say that it doesn't have no identity accept from a chromatic identity.

When you play the scale or improvise with it you'll lose the feeling of tension and release instantly. You'll be basically flying around until you make a whole step or a jump that will break the sequence of the chromatics.

As for the finger settings (They are written in examples of the ascending and descending scale), it's best to play the scale with the third finger on the black keys.

Return from The Chromatic Scale to Piano Theory