Alright, so today we're going to talk about how to build and play jazzy chords.
I'll start with introducing the concept of jazz harmony.

Until today we've discussed building triads and four When we wanted to form a C chord we took the scale of C major, pressed on the first third and fifth note of the scale and formed the chord. 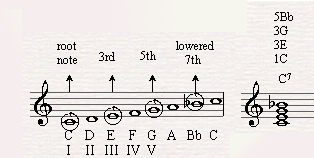 Later (still on the same page) we've added a fourth voice to the scale; the seventh.
Accept from a dominant seventh chord where it's clearly pointing toward the third note of the tonic it functions as a color provider, so how to treat it? As an inside note or an outside note?

Well, usually we treat the seventh as a sort of a middle note. Not really an inside note but also not a pure outside note.

Today when we discuss the Jazz chords we're going to talk about how to mix outside notes with the triads or/and the fourth voices chords. We'll call them extensions.

There's a new consideration we have to keep in mind when we build jazz chords. Jazz is usually often played by groups. In this lesson I'll teach you to play the harmony in the right hand and the bass in the left but we'll already consider problems which could be created when we add some interesting common bass parts played by you or another player.

The Ninth Note in Jazz Chords

In order to form the tonic of that scale we played the first, third and fifth note of scale and then we got C major. Then we added the seventh note and got a Major seventh chord. (If we lowered the seventh we got a C7 chord (the secondary dominant of F). Now I'd like us to go a step further and add ninth note of C major scale, D.

D is called the ninth note because the seventh is being played in the chord as well. Later we're going to add D to the triad chord C major and it will be called the second note since the seventh note won't be part of the chord.

As you can see we have to use five notes in the right hand and the bass in order to produce that chord. The sound we'll be producing is quite full and intense. So how can we lighten up the chord? 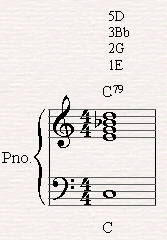 When you'll see this chord symbol Cmajor7/9 or C7/9 you'll know that you are expected to play a major seventh chord or a dominant seventh chord with the ninth note as an extension.

Here's a picture of C7/9 in all jazz chords inversions. 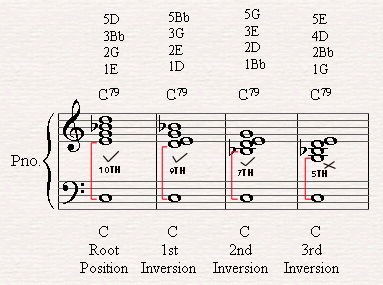 Later on when I'll show you how to play these chords in jazz standards you'll see that we tend to play both C7/9 in the root position or the second inversion (after omitting the root note of course).

The other reason is that because it's more comfortable to combine a chord with the third or seventh in the bottom in voice leading. We'll discuss this issue later fully. Don't worry.

We usually avoid playing the chord with the fifth note in bottom since in jazz music the bas is often playing bass melodies that clash with the fifth so it's better to avoid it. We'll talk about it when we're going to learn about the walking bass. 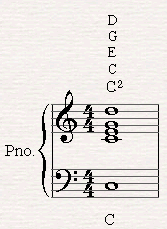 What if we'd like to add the ninth note without the presence of the seventh in the note?

Then D would be called the second note and not the ninth. The chord symbol of this chord looks like this: "C2"

The first thing we're going to do is blend the ninth between the root note and the third since in the top of the chord it is located a fifth higher then G and it sounds to isolated. Then we omit the root note in the right hand from the bottom since it creates an octave with the bass.

Although the ninth note is being placed in the bottom of the chord this is still a common inversion to be used; usually as a beginning chord. (I'll show some examples later). 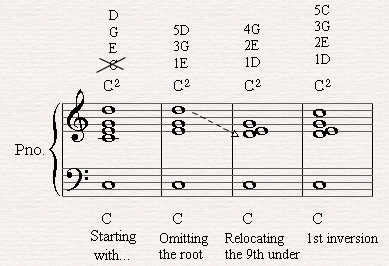 As we proceed to the next chord inversion we'll be adding the root note C, at the top of the chord.
If we play the chord when the third note is on the bottom of the chord we'll realize that the upper two note C and D are two close too each other.

Now I'd like us to learn to add the next extension to our jazz chords. Click here to add the eleventh note to seventh chords.