How to Play Sixteenth Notes on Piano

We're going to play piano pieces with a new rhythmic unit in the next lesson. 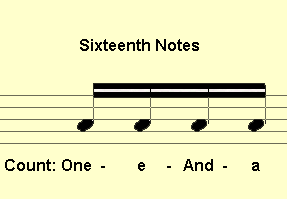 When we first started reading piano notes we talked about the tone lengths of a whole note (Which lasts 4 counts),

the half note (lasts two counts),

the quarter note (lasts one count)

Do you see where the wind blows? Rhythm is divided in multiples of two's.

So take en eighth note, divide it to two and you'll get two equal sixteenths.

In other words There are four sixteenths in a quarter note

Sixteenth notes appear singly, in pairs (Completed to a quarter note by an eighth), or tied together in group of four's.

If an eighth note had one flag on its stem the sixteenths get two stems.

The second sixteenth and the fourth will be "e"and "a" respectively.

All together we say One-e-And-a.

Earlier in this piano course, when we talked about the eighth notes I mentioned that we always count a music piece according to its shortest tone length.
That means that if a piece has sixteenths in it we'll count "One-e" or "And-a" when we see an eighth note and a whole note would be "One-e-And-a"

You'll se how sixteenth rests are combined with sixteenths in the rhythmic patterns below. 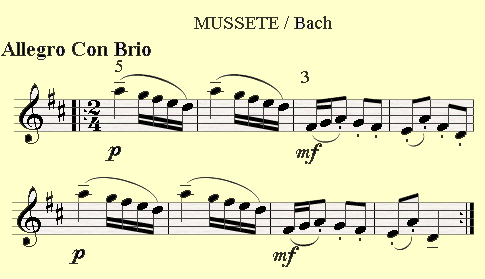 To conclude here's a famous musical piece with typical sixteenths. 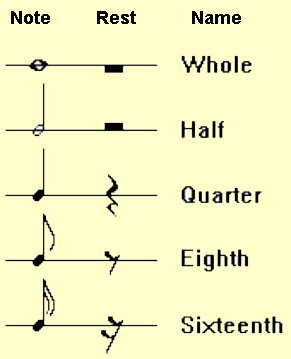 To sum up this issue, let's see a quick review of the different tone lenghths and musical rests which we covered until today.

We're going to learn about different tempo marks which show us how fast or slow we have to play in the next piano lesson.