Sus Chords on the Piano

Suspension chords are chord which are put before dominant chords most often in order suspense the clear tension of the dominant resolving to the tonic.
What we have here is actually a clear case of a subdominant.

The first suspension chord we're going to discuss is the sus7 chord. 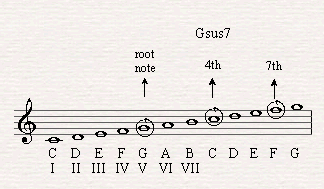 Although sus chords look almost like dominant chords their duty in music is to suspense the tension before leading to the dominant. They function as a subdominant really.

Sus chords do not have the identity of a major chord or a minor chord since they don't have the third in the chord (Because the fourth note is being solved to the third note of the next chord). They basically have three notes; the root note, the fourth note and the seventh note. 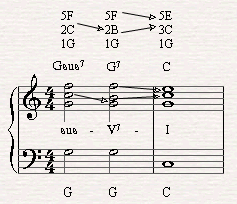 Here's an example of Gsus suspending the tension before going to G7, the dominant (V7) of C.

The fourth note C will is functioning as suspension by creating a dissonance and is about to resolve by step in the following chord (G7) to the third note of the chord (B).
That's the true meaning of the suspension chords.

Now you may wonder what the function of the seventh in the chord is.

Well the seventh note (F) in our case is being held to the next chord G7 and resolves in the tonic to the last chord to a point of a final rest.

Let's see another case of a sus chord with a bit less tension; the sus4 chord.
The sus4 chord functionality is the same only it doesn't have the seventh note but the fifth instead which is more neutral then the seventh. 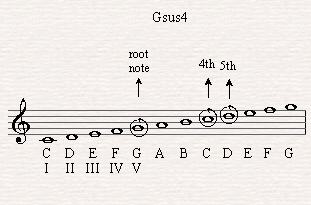 This chord has three notes as well; the root note G, The fourth note (C) and the fifth (D). Since this chord does not have the seventh note it will resolve to a Plain G chord instead resolving to a G7, the dominant seventh chord. 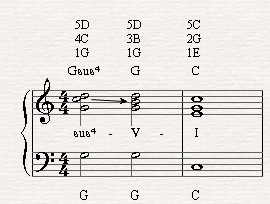 The fourth note in this case is resolving to the third note just like the previous example we saw of Gsus7 but D, the fifth note stays in its place and moving to C as we proceed to the tonic.

The last case of sus chord we're going to discuss in this page is the case of sus2 chords. This chord has the same functionality as well only instead of using the fourth note to create the tension toward the third note from above we're using the second note of the chord to create tension from below. 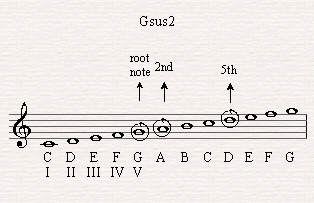 This chord has three notes as well; G the root note, A the second note and D the fifth note.

The First note and the fifth will remain with us in the next chord G. The second note is unstable and will resolve to B, the third note in G. Finally G the dominant of C is going to resolve to the tonic.