What we're going to do in the next piano lesson is set the foundations to understanding how piano scales were created. These piano scales will later help us to understand the structure and logic of a melody and the logic and function of each chord, deriving from a certain scale. We'll start with the tetra-chords.

A Tetrachord is a series of Four Notes having a pattern of: Whole Step, Whole Step, Half Step. 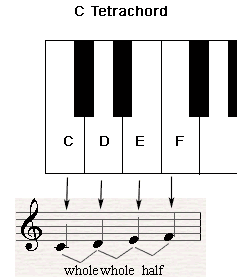 Check out this next one for example... It starts C, moves on to D, E and finally F. The notes are arranged in alphabetical order and so the notes of every tetrachord must be named in alphabetical pattern and have the pattern shown above (Whole step, Whole step, Half step). 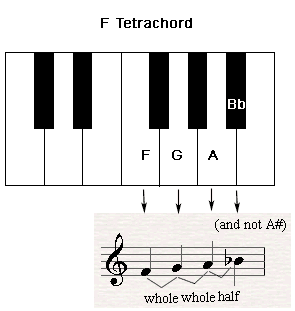 Black keys for example, could be named in two ways (A sharp or B flat for example). If we create a tetra-chord starting from F, we'll use the letters F-G-A and B to begin with. Since there has to be a whole step between A and the next note we'll name that last note of the pattern as Bb instead of A sharp because we would like to keep the alphabetical order of the pattern.

Naming a tetra-chord in alphabetical order is important because it help us to realize that we are moving to a DIFFERENT note with a totally new function instead of augmenting or diminishing THE SAME NOTE.

So if you would write the F tetra chord as F-G-A-A#, you would suggest that you took the third note (the A note) and augmented it in half a tone instead of moving to the fourth note of the pattern.

If you're confused with my last statement don't worry about it. It will be clear as we continue in our study. For now simply remember that all tetra-chord should be in alphabetical order.

Here are examples of a few tetra-chords. 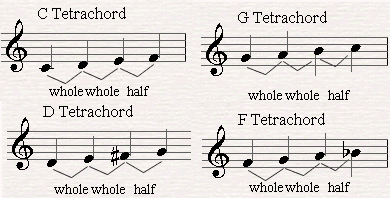 Try to find and name the next tetrachords and make sure you name them in alphabetical order.

Which way is the correct way to write these following tetrachords? 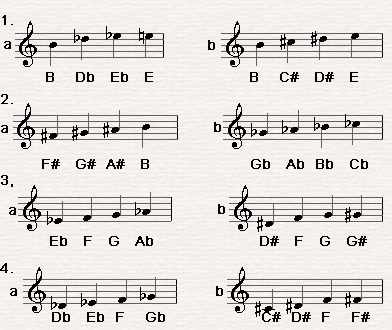 
Now that you understand this let's move on to the next lesson where we're going to learn about our first piano scale (C Major scale) where we'll be combining two tetrachords into one musical scale.

Return from the Piano Tetrachord to Piano Theory Page