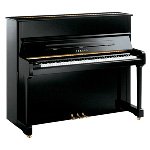 Want to know more about the different pianos before you look for a piano? Doubting which kind of piano you should choose? this quick list is handy in helping you know the important stuff before you make your choice.

A piano player who plays the orchestra would need a grand piano while an accompanist might settle for an upright. But there are more options to choose from...and each option has different styles, designs, shapes and sizes. Let's have a look!

The Grand pianos, got their name because of their length, and since their strings are placed horizontally. These large types of pianos are mainly used for solos and concerts. The largest grand piano is 9 feet long.

If you're playing piano professionally you would probably prefer the Grand piano since because of their powerful tone and their far more responsive key action. The most demanding pieces can sometimes be played correctly only on a well maintained grand piano.
Here are six types of the grand piano from the smallest to the biggest:

The measurement is taken from the front of the keyboard to the farthest point of the bend at the back of the piano.

Widths vary between 54" to 57". The height from the floor to the underside of the keyboard is usually 24" and 28" to the top of the keys. This can vary slightly between manufactures.
A grand piano is also quite heavy. The smallest models of Steinway (5'1") weigh 550 pounds and up to nearly 1000 pounds for a full size concert grand.

Upright pianos or Vertical Pianos are called that way because of their height and since their strings are places vertically. these types of pianos are often installed in living rooms, dens, schools and churches since the don't take up any more room then a couch or bookcase. Here are six types of the upright pianos from the smallest to the biggest: 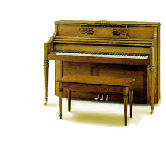 Spinets are the smallest type of the pianos. If your apartment is limited in space a spinet would serve you well. Their disadvantage however is that they are less accurate and lacking power.

In 1935, the Wurlitzer Company built the first 39" tall vertical piano and called it a spinette. In the same year, the Haddorf Piano Company of Rockford, IL (1901-1960), introduced a 36" tall vertical spinet during the National Association of Music Merchants convention in Chicago. The advertising referred to these small vertical pianos as, "The up-to-date piano for the modern home."

There are two big advantages of the console over the Spinet. The first is that their action is direct and therefore has a more enhanced and the second is that these instrument come in different styles and finishes and therefore were embraced by the publick for use in apartments right away. 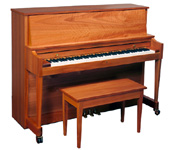 The studio has a larger soundboard and larger strings. It can therefore produce a good tone quality and is also very durable. You can find it in music schools and music studios. 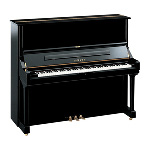 The professional upright with its' rich tone can last for long if it is well maintained. That's why you can maybe still see it at the house of your grandparents.
Today, the term upright is not generally used, unless it is describing an old vertical piano more than 52" tall and nearly 100 years old (victorian). Otherwise, from spinets to professional sizes, the term is vertical pianos.

The Honkey Tonk piano is sometimes use in different kinds of country music. It's an upright piano with strings that are slight out of tune.

The measurement is taken from the base of the keyboard to the top of the lid on the piano.

Modern vertical pianos date from 1935. Although made in different heights, they vary little in width and depth.

Electric pianos first became popular with jazz musicians, because the pianist could duplicate the solo breaks of a guitarist along with the chording of a piano. Because electric pianos can be carried on the road without the detuning problems of traditional pianos, many traveling bands use electric pianos and synthesizers almost exclusively. 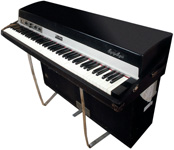 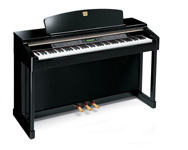 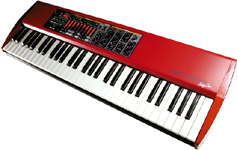 Return from Types of Pianos to Buy a Piano