In order to learn about the 12 bar blues we first have to discuss the development of the blues.

The blues was first being sung by the slaves who where brought to America from Africa. It was their way to express sadness, distress and pain. The meaning of "blue" is not completely defined but it has to do with a melancholic or sad feeling. The blues and the blues scale have these characteristics of sadness in their nature, caused by bending some of the notes in the scale. The so called Blue Notes.

Yet, the blues could be played in a cheerful vibe as well, and especially with some interesting rhytmic figures which were brought by the African culture.

Later on the form of the blues became more clear and was treated as a standard scheme of 12 bars and the text and musical structure was being set.

The first four bars included the first musical line and text introducing the blues theme. The second four bars repeated this line to increase the impact and the closing line (which is being played in the last four bars) included a conclusion of the first and second line. 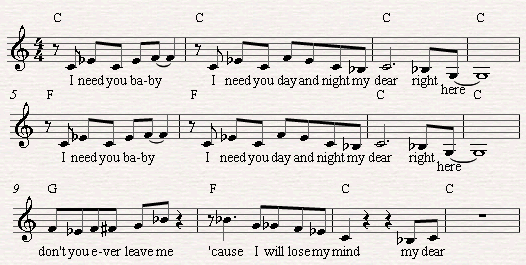 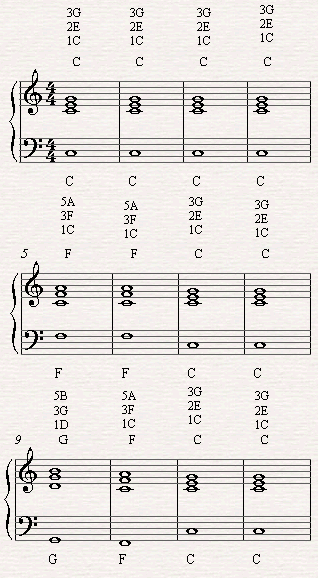 The standard harmony of a simple major blues is built of the first, fourth and fifth scale degrees of the major scale:

I suggest you study the form of the blues by heart. You're going to use it many time to when we'll learn to improvise. It is so easy to learn it and a great place to start your improvisation lessons with.

The blues scale was being sung later over this chord scheme, which you're soon going to find, is quite different then the major or minor scales. It's not diatonic, more than that it contains all the "wrong" notes.

The notes in the blues work differently then in the major and minor scales. Instead of being solid or having a clear and strong function within the scale, they supply a certain impression or a mood, the blue mood. That's why the notes in the scale are called blue notes.

We'll discuss the blues scale in details once we're through with this page (Or Click here if you can't wait).

For now I'd like to show you the 12 bar blues in the minor form.

Or Click here to go to the blues chords page to learn how to add color to the plain chords of the 12 bar blues scheme.

Last bu not least, there's a way to play with the chords of the 12 bar blues scheme and replace to create more interest in the scheme. We're going to talk about it in the Blues Chord Progressions Page.

Return from The 12 Bar Blues to Piano chords