During the last two lessons we discussed the blues Click here to learn about the 12 bar blues if you haven't read this lesson yet) and now after we added the seventh note to the chords Check it out in the Blues Chords lesson) we're ready to add some chord progression to the plain blues in order to spice it up a little bit. 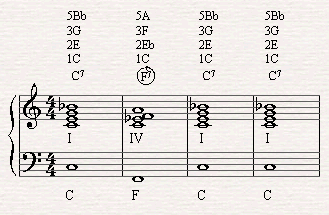 The first chord substitution we can make in the blues scheme is replacing the second chord of the first seventh degree with a subdominant seventh chord.
Playing four times the tonic in the first four bars could be quite doll. 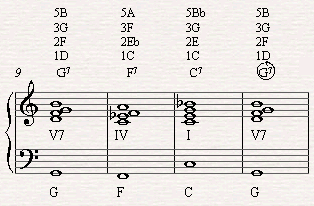 Before we add talk about the typical blues chord progressions I'd like to say that many people consider these changes within the blues scheme unnecessary. They think that the quality of the blues is in its simplicity and all the changes which are made just jazz it up too much.

However, everything develops in time and so did the blues chord progressions. It's up to you to choose how many changes you'd like to add to the blues when playing it. A bebop blues (which we will discuss later is naturally more complicated then plain blues).

Back in the chord substitutions lesson we've learned about the II-V-I chord progression. The two five one is the most common chord progression in pop music for its strong effect as part of the diatonic circle ( Click here to learn all about it).

What we're going to do now is add some II-V chords before some strategic blues chords and by doing so we will actually prepare the ear for what it's going to hear. 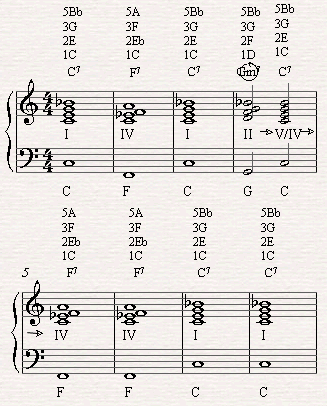 The first II-V we're going to will be on the fourth bar of the blues where C7 is being played. C7 is already the dominant of F. What we're going to do is divide the bar to two parts.

In the first two counts we'll play Gm7 the second degree of F major, then play C7 in the last two counts and continue to F7 the subdominant in C major scale. 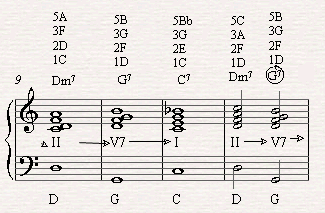 Another II-V-I chord progression we're going to make in the blues chords is in the last four bars where the G7 is played in the ninth bar and F7 follows.

It is also possible to add a Dm7 in the first two counts of the twelfth bar and to create a II-V-I leading to the beginning of the blues scheme. 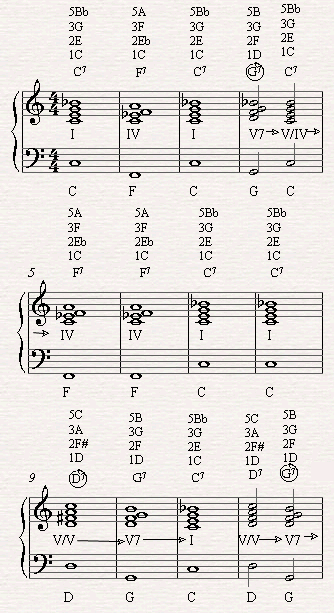 After adding the II-V progression to the blues scheme it is very simple to switch each of the relative second degree we've been adding with a dominant chord. This is a very common blues chord progression.

So instead of playing Gm7-C7 in the fourth bar we could play G7-C7, which are two dominant chords, the first a secondary dominant and the second is the true dominant of F7.

We can substitute Dm7 in the ninth bar with D7 and create two following dominant to C in the eleventh bar as well.

We already saw such chord progression in the B part of I got Rhythm ( Click here to review this lesson). 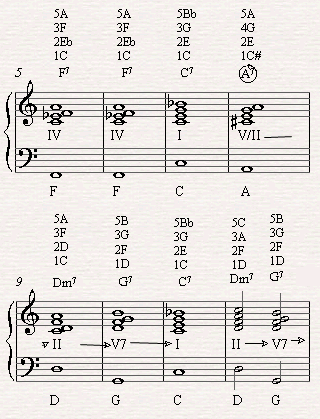 The bebop blues has been developed in the 'round the forties. Musicians like Charlie Parker and Dizzy Gillespie wanted to expand Jazz music into a more intellectual direction after all the year people have been dancing to the swing. 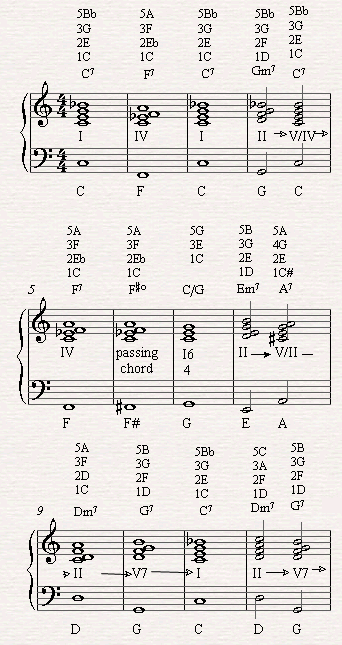 The new changes which were made to the blues were substituting the sixth bar where the second subdominant is played (F7 in C major) with F#o which is a passing chord leading to a cadential 6/4 or to C/G in C major.

The reason that C is played with G in the bass is to create a beautiful melodic bass line walking chromatically up.

A bar later where A7 had already been substitute with C7 in the plain blues another II-V-I chord progression has been added.

So instead of Playing A7 going to Dm7 they played Em7 in the first two counts going to A7 in the last two parts of the eights bar leading to Dm7 in the ninth bar.