I Got Rhythm - Examples of Common Chord Progressions

Home » Piano Chords » I Got Rhythm (Examples of Chord Progressions)

I got rhythm is a fantastic song; so groovy and easy going. But more important it contains the most important chord progressions we've learned and so it's simply a school of music in one song.

In this page I'll introduce the chords and will talk about the chord progressions.
I'll show you exactly how to play the chords in the right inversions with the right voice leading.

So much can be said about this song, really. Once you know how to improvise to I got Rhythm you officially found your way in the jazz world.

I'll divide the discussion about I got rhythm to two parts. The first part will deal with the chord progressions in the song and the second part will discuss about all the possible chord substitutions you can create in the song.

Before we start I'd like to say that the scheme of the chords of "I got Rhythm" is also called "Rhythm Changes" since many musicians have explored the chord progressions in this song and expended it enormously. (I'll deal with the second part a bit later in our study after we explore some jazz chords.

Let's start with the verse. I'll introduce the song in C major. 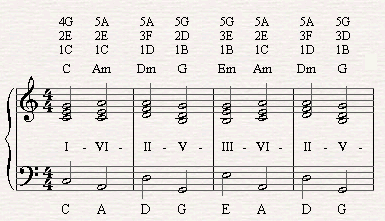 The verse starts with a classic turn around of I-VI-II-V repeating two times.

As we complete one turn around we'll be chord substituting the I degree with the third degree and perform this turn around III-VI-II-V. 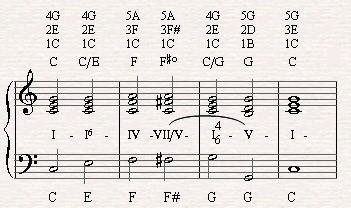 The second turn around brings us back to the tonic, C major chord.
From C major we go to C major in its first inversion. Nothing changes really accept from the bass jumping a third high to E (stated by a slash chord).
Next we move to F (IV) and from then we go to F#o which is basically a passing chord to G major the dominant.

Let's talk about F#o for a moment. Remember we've been talking about the secondary dominant? well, this chord is a secondary dominant too. It's not the direct secondary dominant of G (D7) but a sort of chord substitution to D7. F#o (F#, A, C, Eb) has three identical notes with D7 (D, F#, A, C).
It is the seventh degree in the scale of C major.

That's why we'll name this chord as the VII/V (G major is the fifth degree of C major scale).

Before we'll play the dominant chord (G7) we discover another slash chord, C/G which is actually a C major chord in its second inversion. This quite tricky though since C/G is does not function as a tonic. This chord is called a cadential 6/4 and its purpose is to embellish and intensify the dominant.

Therefore we will naturally move from the cadential 6/4 to the dominant seven and end up with the tonic. The verse repeats two times.

After the chorus another verse repeats which brings me to another important point about this song. The form of this song is the most common in standards around that time (Standards are song which became common to use for purposes of improvising by many jazz artists).

The form of this song is AABA. Two verses a chorus and a closing verse.

Here's a free piano chord chart of the chord progressions in the song. I suggest you use this chord chart just to check if you're doing well at remembering the song by heart in the right inversions.

If we add a fourth voice to these chord progression we'll be playing this chords in this manner.
Click to see a free printable piano chord chart.

The next step would be discussing all the possible chord substitutions in this song (There are plenty!) I'll come back to this later so stay tuned.

By being able to play Rhythm Changes we can understand better the concept of a song and learn to create interesting chord substitutions. Besides learning some chord theory you should also be able to move smoothly between the chords and then create different rhythms with these chords.