1. Melody - Piano scales are the key to understanding western music. That means that by studying piano theory and scale you'd be able to realize how a melody is built and be familiar with the nature and the musical rules that apply for the whole piece.

That's what motivates us to learn piano theory. At the end it will improve our piano playing and our understanding of music.

2.Chords - derive from piano scales as well. With the help of piano scales we would be able to understand the musical connection between different chords.

3. Playing piano by ear - Combining the knowledge of piano scales along with a healthy musical intuition is the code to playing melodies by ear.

4.Improvising - Scales are a great improvisation tool. We can use them to improvise in a challenging manner. We'll be talking about this later in details. 5.

Exercising - Scales are great for practising your technique and concentration.

Just a reminder... A half step or half a tone is the distance from one key on the keyboard to the next adjacent key. It doesn't matter whether it's a black key or a white key.

A whole step is the distance of two half steps. We'll form music scales with half steps and whole steps.

What is the distance between B and C? B and C#?

The major music scale is a very common scale and is often interpreted in music as an optimistic or a happy scale.

Let's take C major scale for example which is built of these notes : C-D-E-F-G-A-B-C. 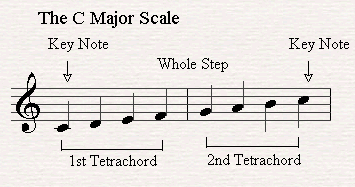 Now remember that I showed you how a tetrachord is built out of the pattern of a whole step, whole step and half step? Well C major scale (and every major scale in fact) is made of TWO TETRACHORDS joined by a WHOLE STEP.

C Major scale is made out of eight notes which happen to be all white (so there is no sharp or flat notes in the scale).

Each scale begins and ends on a note of the same name as the scale, called the KEY-NOTE. C is the key note of the C Major scale.

Notice that the major piano scale is written in ALPHABETIC ORDER as well.

Now let's measure the distance between the one key to the next one and so on until we would be able to form the formula of the C major scale (and every other major scale as a matter of fact).

If we keep measuring this is what we get...

As a matter of fact we can now say that the major scale is built out of this formula. W W h, W W W h

Can you try to find G major on the piano?
Start with the KEY NOTE and follow the formula of the major scale.

Click here to see if you got it right