We're going to learn to invert piano chords in this next piano lesson. I wanted to cover the subject piano chord inversions fully and therefore I divided this lesson into two parts.

If you follow the complete mediocre lessons level 2 follow the first part where I'll teach you how to invert the first 3 basic chords we've learned. I will let you know when you have to move on to the next piano lesson in the complete course. We'll come back here after we cover more piano chords.

However, if you're familiar with other piano chords and you'd like to learn how to invert all of them, read this piano lesson fully.

A triad is a chord which is made up of three notes and is based on the interval of a third. We covered three triad chords until today: C major chord, F major Chord and G major.

When we figured out how these chords are built and how they sound I showed you how to play these chord with the right hand and add the bass note with the left hand. We played the song jingle bells while counting four quarters and I emphasized how important it is to keep the left hand connected in order to create a feeling of a musical continuity.

The right hand however had to perform big jumps from one chord to the other. Is there a way to create musical continuity between one chord and the other? Sure there is! That's why we learn about chord inversions today!

You probably noticed that lifting your hand and jumping to another area on the keyboard was unavoidable. This jump creates an unfriendly pause between the two chords and that disturbs the continuity in the music.

Our ear likes to have a musical connection between chords. This connection is created when chords are kept close to each other. That's because continuity in music is based on moving in half steps or whole steps. A music that is made out of too many gaps often is harder for us to understand since we can't make the connections in our mind related to what we're hearing.

The reasons we love to hear whole and half steps is because it's easier to sing notes that are closer to each other. It's hard to perform big jumps when singing and stay in tune and historically speaking the first born music was vocal.

So today I will show you how to keep chords close to each other with the help of chord inversions and to create a logical movement of steps between the different voices of two chords.

We'll use the same chords as we did before (C-E-G for C major for example) but we'll switch the order of the notes of the chord in order to locate it closer to the previous chord (So instead of playing C-E-G we might use E-G-C or G-C-E). We're still going to use the C note in the bass which will point out that we're playing a C chord, only in a different chord inversion.

By connecting chords with the right chord inversions you create a voice leading. Western music is built out of harmonic progressions. The voices inside each chord are leading smoothly to the next chord in a way that creates tension or release. We'll focus on voice leading later in our study. For now let's move on to practical inversions and you'll get the rest soon enough.

Alright, back to C major. C major is built out of three notes C, E and G. When you play these notes in this order you play the root position of the chord. That means that C, the note which the intervals of the chord are built on, is also the lowest note of the chord. 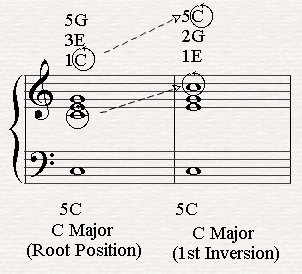 In order to move to the first chord inversion all we have to do is place the root note above the notes E and G instead of under these two notes. This is what we call the 1st inversion.

If you'll listen to this chord inversion you'll notice that it has a more open sound. The replacement of the root note above the two other notes allows the chord to develop harmonically more easily. 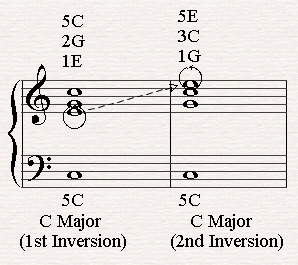 Now for the second inversion; we have to repeat the same procedure by replacing the E chord, which is now the lowest note of the first inversion, above G and C.

If we continue this procedure and place the G above C and E again we'll get back to the root position of the chord. To conclude one can say that triads (three voices chords) have three inversions: The root inversion, the 1st inversion and the 2nd inversion. 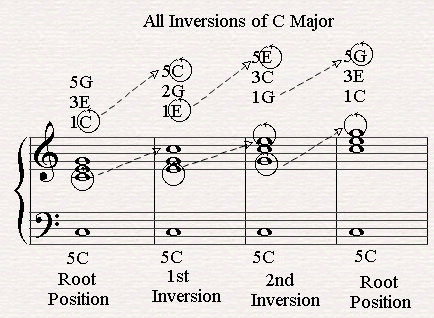 Here's a clear view of how three three inversions of C major look on the keyboard. 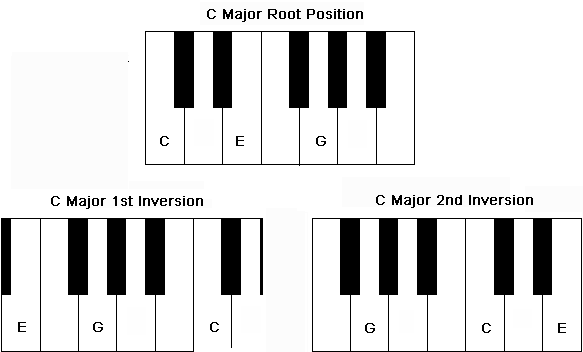 We can perform this process with the F major and G major as well, and with all the triads we're going to learn in the future. 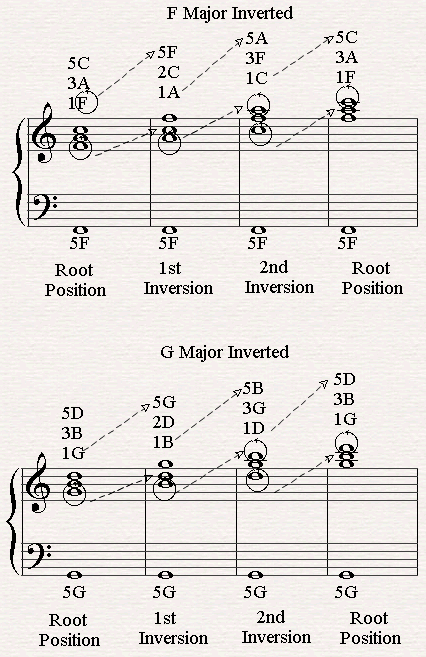 The correct piano fingerings for each chord inversion are provided in the above image next to the letters of the notes that create the chord. You should basically stick to 1, 2, and 5 through all chord inversions except from the second one.

How to Practice Songs with Inversions?

Remember the example I showed at the beginning of this chord piano lesson? Where we tried to find a smooth way to change from C major to F major? Let's take Jingle bells again for example. These are the chords of the first part of the chorus.

Before this chord inversions lesson we would play a basic C chord for four bars with the right hand and on the fifth bar we would jump to an F chord in the root position. Now however, we can invert the F chord in order to locate it closer to the C major chord.

This is just one example of how I can limit myself. I could also say that I will play all the chords within A under middle C and G# sharp for example, but I will not go beyond and octave which is the distance between 8 notes (from middle C to the upper C for example).

You should know that as chords progress from one to the other they mostly move beyond the range of an octave but limiting yourself to such a narrow range is excellent for practicing reasons. 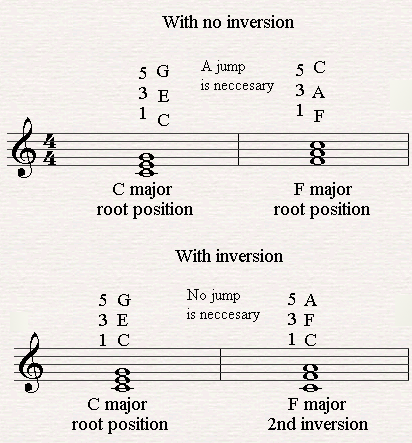 If we are limited to playing chords from middle C to B for example we can't play F major in its root position since its upper note C is played above our limit, B. We have to invert the chord and place the C note under F and A. At the end we're left with C F and A; the 2nd inversion of F major.

If we go from the root position of C major to the 2nd inversion of F major all we have to do is raise the upper two keys (E and G) one white key to the right to F and A.

Bottom line, the upper two voices of the chord mover in one step. G move within a whole step to A and E moves within a half step to F.

1. Play C, F and G major on all 3 inversions on the keyboard.
2. Try to play Jingle Bells again but this time limit yourself to playing all chord within B under middle C and Bb above it.

Check out the piano tutorial above to see how I do it.

From now one when we're going to learn a new chord I'm going to also show you its chord inversions.

The biggest problem you face when trying to play a song smoothly with chord inversions is that you have to be able to remember all the chord shapes and switch between the different chords fast. The goal of learning to play the piano chords quickly could be achieved much faster with the help of the Rocket Piano Learning Kit that will help you to train your fingers to automatically remember all the chord shapes, in 1/3 the time!

You'll learn all about how your brain processes information, and how to maximise your piano practice time... (nine out of ten people are absolutely floored by this secret!). Click here to check out the Rocket Piano Learning Kit Now!

It is also possible to invert Minor, Diminished and Augmented chords by following the same process. Here's an example of chords from each of these types. 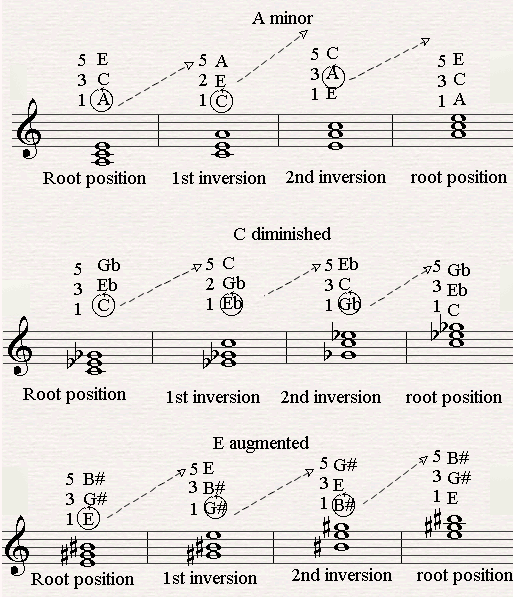 Four voices chords are inverted in the same manner but since another voice is added to each chord we get another inversion. You can find an example of a G7 chord with the suitable fingerings for each of the four inversions of the chord. 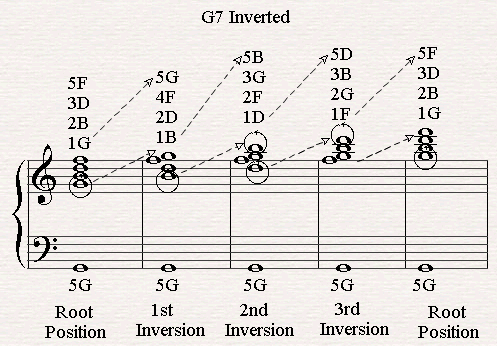 This is basically it for this chord piano lesson. My suggestion to you is that when you pick up a song; first make sure you're familiar with all the chords in all chord inversions. Then find the correct chord inversion of each chord within a limited range of less than an octave. Try to pass from one chord to the other as smoothly as possible within the rhythmic frame.

This is the best way to learn to play inversions in a practical manner. If you don't seem to find an inversion of a chord right away, simply start from the root position and carefully climb the suitable inversion within the desired range on the piano.