This next lesson is about the concept of creating a chord substitution for the three basic triads of the most important (I,IV,V) scale degrees according to their function. We'll discuss each of the other scale degrees in the major scale in order to understand how to substitute them or add them to the three main degrees of the scale.

This Piano lesson continues the previous lessons of chord theory and three chords and the truth.

Here are the chords progressions we're going to cover in this lesson. Click on a specific chord progression if you want to see how we perform a chord substitution in it.

Until this moment we've learned that every major and minor scale has seven special triads, called diatonic triads which are formed upon the scale degrees.

After we've learned to find all the diatonic triads of the major scales and minor scales we talked about the three main chords and their functions. The I (tonic), IV (subdominant) and V7 (dominant).

The second scale degree of each scale is called "supertonic". Super is Latin for "Above".
If we add the third and the fifth note of the second chord degree we get a minor chord. If we take C major as our home key for demonstration we'll get a D minor chord.

In order to understand the function of the D minor chord let's look at this image.

If you'll have a look closely you'll notice that D minor and F share two identical notes (F and A). These two chords are almost the identical. That gives us a clue over the function of the second degree chord in the scale. It's a sort of replacement for the subdominant; Bottom line, Dm (the super tonic) is a handy chord substitution for F (the subdominant)

Since we already explored the chord progression of IV-V7-I I can now tell you that II-V7-I could be his almost identical brother. These two chord progressions create almost the same impact. In pop music and jazz the II-V7-I is very common. Lots of standards (famous songs everyone likes to use for improvising with) are based on this chord progression and include a drop of a fifth from the second degree and back home. 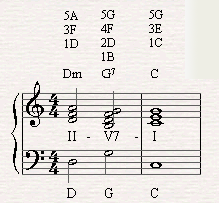 Examples of songs with II-V7-I

A place in the sun
Blue moon
Satin Doll
This year's kisses
Tune Up
What is this thing called love?
Night and day

Here's a piano chord chart of the II-V-I chord progression in all major scales.

Now we can take this chord progression a step further. We can start with the first degree go to the subdominant, make a chord substitution with the second degree (which also functions as a subdominant) that would lead us to dominant and go back to the first chord degree. 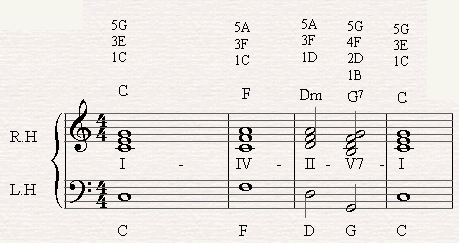 "Run Around" by the Blues Traveller could be a good song to practice this chord progression with.

If we build a triad upon the sub-mediant which is the sixth note of the scale by adding its third and fifth note we'll get an A minor chord.

Note that A minor is also the parallel minor scale of C major.

The sixth triad opens a few possibilities for some nice chord substitutions.
The first is I-VI-IV-V.
If we take C major as an example we'll get this next chord progression:

The Big change occurs when we shift from the F major to G which changes the harmonic atmosphere to a dominant chord creating the need to solve the chord progression back to the tonic (C major).

Here's a piano chord progression of all I-VI-IV-V in inversions.

By the way, we could even take this chord progression an extra step further by adding a a chord substitution for the IV degree the second degree. 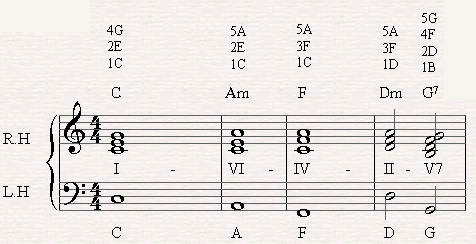 This chord progression is very pleasant to the ear since it's consequently moving down in thirds which makes it clearer in the ear of the listener.

Here are the scale degrees of the turn around. I-VI-II-V7 or if we take C major we get C-Am-Dm-G7. 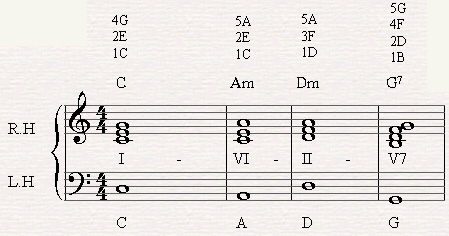 We start by moving from the first degree to the sixth degree. A minor, as we already learned, is the parallel minor chord of C major; so when we make a chord substitution here with the tonic we basically stay with the same harmonic material. Shifting from A minor to D minor has the same impact as we've seen before when we moved to the fourth degree. D minor is clear suspension just like the subdominant.

Now we will move to the dominant (G major) to fulfil the tension solving back to the tonic again.

Here's a piano chord chart of the turn around in all major scales.

Here are some songs that contain a turn around:

By the way I-VI-IV-V-I is also a sort of turn around as well since the II degree and the IV has the same impact of suspending the dominant.

Another option is to start from the first degree, go to the dominant right away and instead of going back to the tonic as demanded create a chord substitution by going to the sixth degree; By doing so you it's possible to postpone the end of the line. Afterwards we can go to the fourth. 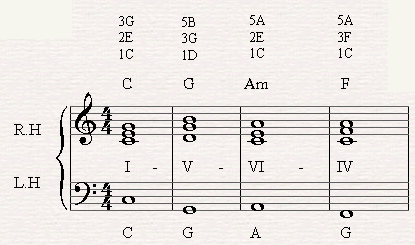 There are many famous songs who have this chord progression in their body. A good example is "No Woman No Cry" of Bob Marley and Let It Be by the Beatles.

The mediant is the third scale degree of the major chord. It is located between the tonic and the dominant and that's why it is named "middle" in Latin. The triad which is based upon this scale degree by adding the third and the fifth note in a C major scale is E minor.

So, we can use this triad to make a chord substitution with the tonic without creating a lot of impact from an harmonic point of view. The third degree could also replace the dominant as well, allowing the chord progression to last longer since if we use the fifth as a dominant we have to go back to the tonic. 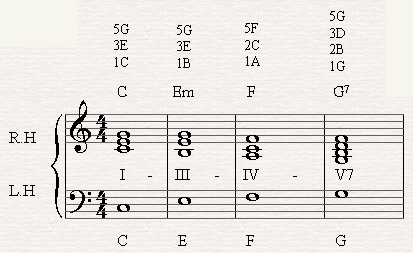 Here's a piano chord chart of I-III-IV-V7 in all major scales.

This example is quite similar to I-VI-IV-V only instead of going down harmonically - we go up. There's a chord substitution from the first degree to the third degree with only one note changing (in C major C major the C is changing to B).
Then we go to the fourth degree which leads us to the fifth closing this chord progression to the first degree.

You Know My Name (Look Up The Number) by the Beatles is a good example for a song that contains the chord progression.


Another nice thing to do is to replace the I degree with the third in the turn around.
So you start with a classic chord progression of I-VI-II-V and then instead of going to another turn around starting with the first degree you play a turn around with the third degree. 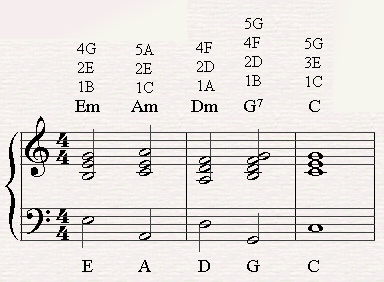 What you're seeing here is the beginning of a famous chord progression called Rhythm changes. We're going to discuss this later in details.

Such an example demonstrates well how the III degree can replace the I degree.

Let's have a look at the seventh degree triad. If we take C major again for example B would be our seventh note, also called the leading tone. If we add a third and a fifth to it we get a Bo, a diminished chord.

Now let's compare it with the dominant. Notice the Bo and that G7 has all the notes of Bo. Do you see where I'm getting at?
The triad of the seventh degree serves as a dominant just like the fifth degree (The dominant).We can make a perfect chord substitution between G7 and Bo

If we use the II-V7-I chord progress we can replace the fifth degree with the seventh degree and play II-VII-I. ex of C major Dm-Bo-C 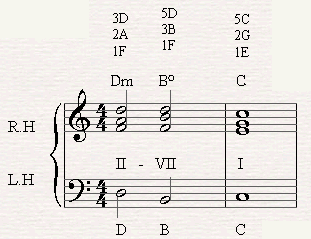 Here's a piano chord chart of II-VII-I in all major scales.

By being able to create different chord substitutions we can understand better the concept of a song and learn to play it faster and musically. The problem is besides learning some chord theory you should also be able to move smoothly between the chords and then when you want to create different rhythms with these chord starts the real journey...