Playing a D chord is easy. Let's start with the ROOT POSITION. A D Chord is built out of the notes D-F#-A.

The D major chord has the same optimistic or joyful sound as all other major chords because all major chord are built out of the same Musical Intervals. 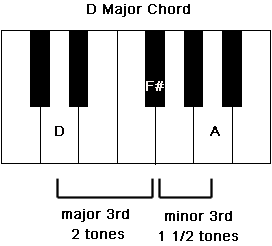 I always recommend trying to first try to find a major chord by ear and then check it out by measuring the intervals you came up with. In this case for example I would press on the ROOT NOTE of the chord (D), then skip the next white key and go to F, skip a note again and play the A note.

Now when playing those three notes (D-F-A) I'll hear that this chord sound rather mellow, more like a a minor chord. So all I have to do is raise the minor third in half a tone in order to turn it into a major third. So I'll end up playing the D-F#-A notes. 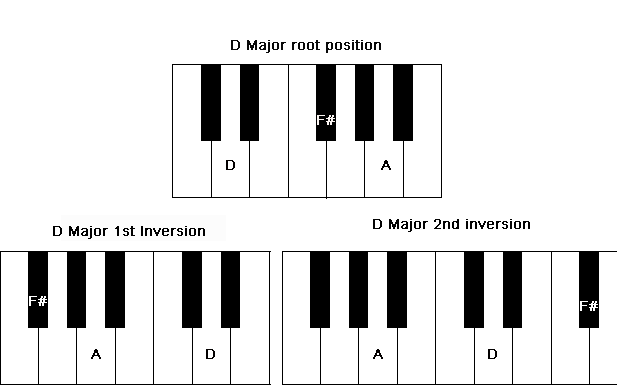 Now let's invert the D major chord into all possible inversions. If you have not idea what I'm talking about Click here to follow the Chord Inversions piano lesson.

The possible chord inversion are given in the image.