The mode is created when you take a major chord and you start playing the scale from its second note.

The result is a minor scale with a major six.

It's interesting to realize that this scale is symmetric.

How to use the Dorian Mode?

Let's say we're playing a song in C major. In that song we have a II-V-I chord progression leading to C major chord.

The second degree of C major is Dm. In this case it would be clever to use the Dorian mode when improvising on the C major chord rather the a plain D minor scale since we could keep the same notes of the Mode through the G seventh chord all the way down to the tonic.

It wouldn't be wise to use a plain Dm chord in this example since the Bb found in Dm scale is not a part of the scale of the piece as well. 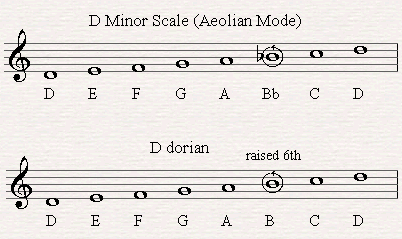 When you play the mode over the II-V chord progression it's better to play the B note as a passing note and not on the Beat.

We'd like to avoid the B note on the beat because the next chord is a G major chord. B is the third note of G major and by playing it on the beat of a D minor chord (or as a matter of fact playing it at all on D minor) would be a shame since we would release the tension to this note a bar earlier then expected. 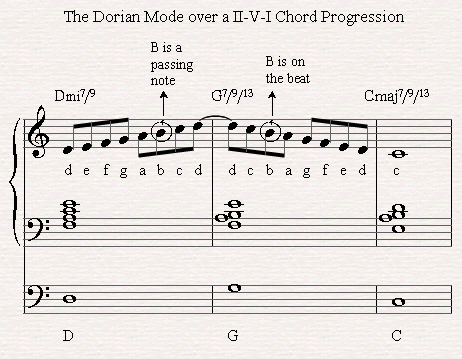 Compositions in the Dorian Mode