Did you look for the E chord? O.k. if you followed my instructions (Don't know what I'm talking about? Click here to find out) then you tried to form the E major chord in the same way as we did with the C major and G major (Pressing on the first finger on E the third on G and the fifth on B).

However if you'll listen to the chord you're playing carefully you'll realize it doesn't sound quite the same as the G major and C major. Its mood is different, Rather mellow lets say.

Well let's solve this on the theoretical level. If we count the first interval between E and G we'll realize we play a minor third... hmmmm... 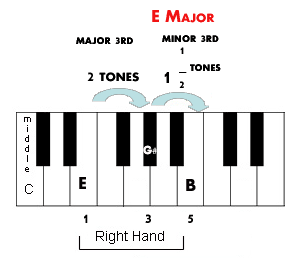 The major Chords have a Major third as a first interval, so lets raise the G in half a tone to get 2 tones between E and G sharp which is the major third interval.
Walla! Now we play E major chord.

My advice to you? It's easier to solve this sort of issues by developing a good musical ear. Just trying and trying until you succeed.
If that doesn't help or you wanna be sure you can count the intervals and double check your ears aren't misleading you.

Let's take this another step forward. Try to find B major on the piano. Click here to see if you're doing well.

Return from E Chord - How to Form it to Piano Chords.