G major Scale on the Piano

In the previous piano lesson we learn that all major scales are built of a certain formula. We formed the C major scale according to that formula and I asked you to try and form the G major scale at the same way. 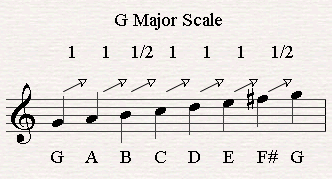 As you can see the scale of G major is based exactly on the same formula. 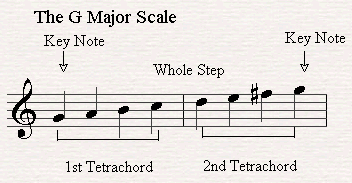 You can also say again the G major is based on two tetrachords joined by a WHOLE STEP again.

And this is how we form all the other major scales.

Inside the scale musical forces are certain notes are attracted to specific notes. The most common of them is the seventh note (B in C major) which is clearly aiming toward C. That's why it is called the leading note. It demands us to go us back home like a musical magnet.

The reason that the leading tone is clearly attracted to the KEY NOTE (C in the C major scale) is because they share a distance of half a tone only which is creating attraction (and drama) in music.

What is the leading tone in G major scale then

Later on when we will speak about Chords we will remember the effect of the leading tone in order to understand the function of chords in a musical context.

Now, as you probably noticed, the G major scale has F# in it and so when we'll play pieces that are based on that scale we'll play F# through out the whole piece.

The sharp, flat, or natural signs placed at the beginning of a staff indicating the tonality of the composition are called the key signature. From the KEY SIGNATURE you will see that a certain piece is in the KEY OF G MAJOR for example because it will point out that all F's must be SHARPED. Watch for the F's in the following few pieces here below...(coming soon)

Now there's more to know about the key signature but this will do for now. I'll show you more about it later.

There are few reasons to learn to play the 12 major scales. These piano scales will help you to understand the logic behind a piece you play, and give you tools to build piano chords and harmonize tunes by ear, and if you want to improvise you should use scales to play a solo to really impress your friends and fellow musicians.

In order to get the full potential of piano scales you should go through the Rocket Piano Ultimate Learning kit. With Rocket Piano you'll learn to use scales to improvise by learning about melody, harmony, chords, arpeggios, and how to play chord progressions in any key. Click here to check out the Rocket Piano Learning Kit Now!