During the past three lessons we started to talk about extensions. Now that we know how to form jazz chords I'd like us to go back to the II-V-I chord progression and see how to play it as a jazzy chord progression.

We'll start with Looking at this image. 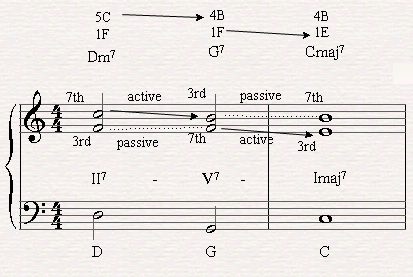 Now let's have a look at the right hand. Two voices are necessary in jazz music to indicate the identity of the chord. The first voice is the third.
In the picture F is the third of D. The third let us know if the chord is a major chord or a minor chord. The second voice is the seventh. C in our case is the lowered seventh of D so what we deal with is a seventh chord and not a major seventh chord or a sixth chord.

If you'll look at the second part of the jazz chord progression where G7 is moving to Cmaj7 you'll notice that B which played an active role in the first part is now playing a passive role when it changes functionality from the 3rd of G7 to the major 7th of Cnaj7 without moving at all. F the 7th of G7 on the other hand was passive in the first part. Now it's his turn to be the active note by moving to E the 3rd of C major7. To conclude we can say that the 3rd and the 7th notes of the chords are switching roles in the II-V-I Jazz chord progression in jazz. If at first the upper voice is active then at the second part the lower voice will be active. 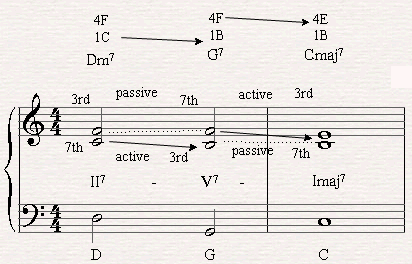 In the second chord inversion same applies only the lower voice is playing the active role first. 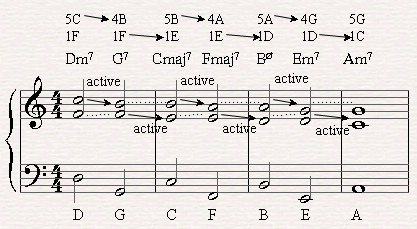 If we choose to continue this process through the whole diatonic circle we will discover that this rule applies for the whole Jazz chord progression.

On top of the skeleTone we're going to address the extensions. We'll start by adding the fifth just to add body to the chord and the 9th note. 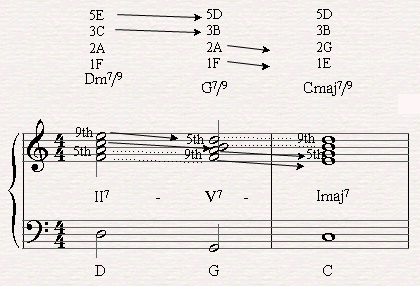 The next picture show us a possible voice leading in a II-V-I chord progression after adding the ninth note and the fifth to the three basic voices in C major.

In this voice leading that which have been added are A (the 5th of D) and E (the 9th).

When moving from Dm7 to G7/9 we can see that the upper two voices are taking an active roll. E the 9th is stepping a whole step to D the 5th of G7/9 and C (the 7th) is moving in half a step to B (the 3rd) since it is the active note.

A on the other hand is staying in its place, turning from the 5th of Dm7 to the ninth of G7 and F the passive note (the 3rd of D minor), remains in its place as turning to the 7th of G7.

In the second part of the chord progression where G7 is going to Cmaj7 will notice that it's now the turn of lowest to voice to become active while the upper ones stay passive. A the 9th of G7/9 will take a whole step as well to G the 5th of Cmajor7 and F the 3rd of G7/9 will walk a half step to E the 3rd of Cmaj7 since it's his turn to be the active voice. The upper two voices D (the 5th) and B the (3rd) will turn to the 9th and the 7th of Cmajor7 without performing any movement.


Here's a free piano chord chart of the II-V-I with 7/9 chords in all twelve keys.


In the other common inversion of this chord progression same applies only vice verse (We like to have the 3rd or the 7th in the bottom since they are best for voice leading). 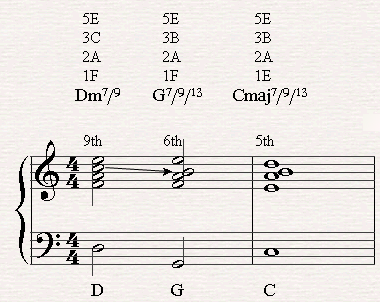 The picture demonstrates the process in II-V-I chord progressions. If before we used to move the first two upper voices now we're only going to move what's necessary; moving the 7th note to the 3rd.
E the 9th of Dm7/9 will become the 13th of G7/13 without performing any movement.

In the second part of the chord progression we two voices will move. The active voice will move from the 7th to the 3rd. E which was static before will move to D and change functionality from the 13th of G7/13 to the 9th of Cmaj7/9/13.

A, the 9th of G7/9 used to move to G the 5th of Cmaj7 in previous example. This is possible here too of course but let's try to leave it static and discover we've created a wonderful 13th chord called C7/9/13. Wow!! Now we're really talking jazz!


Here you can preview this chord progression in both common inversions in all twelve keys.


Suggestion for a good exercise to practice the II-V-I jazz chord progression:

Start with II-V-I in C major and play the first example after you've arrived the tonic (be careful) make C the second degree of the next chord progression.

If now you start with the 3rd as lower voice repeat the exercise with the 7th as the lower voice.

Next play this exercise from Ebm7 to cover the other whole tone scale. Do the same with the second chord progression and the third one in the same way. This is quite a lot to do but I guarantee you that if you'll do this you'll master jazz chord progressions pretty fast.

Understanding the concept of playing jazz is a big problem for many musicians out there. If you want to take the next step in playing jazz like a pro you should check out the Jazz 101 Course by Hear and Play.

James Wrubel, an amazing musician and expert instructor, will teach you to form tons of chord patterns quickly and easily and runs that'll have you sounding pro almost overnight. You'll learn to accelerate your jazz learning curve by combining 3 secret elements and to pack every chord and voicing with just the right amount of flavor to get the job done. Click here to check out the Jazz 101 Piano Course by Hear and Play