The minor piano chords are the so called melancholic cousins of the major chords.

What we're going to do is learn to recognize the musical effect minor piano chords create, try to find them on the piano intuitively and approve our trial with the help of a little bit theoretical knowledge based on Musical Intervals.


The story of the minor chords is a simple one. Let's start with the theoretical level.
When we spoke about the major chords we found out that every major chord was built out of a major third and a small third

The minor piano chords however, are built the other way around. The are formed by a minor 3rd and a major 3rd on top of it. So you basically switch the order of the intervals of the major chord.

Let's take a C major piano chord for example. It contains the notes C,E, and G. In order to turn it to C Minor all we have to do is lower the E note in half a tone and press on E flat instead. At the end we stick with these notes (C-Eb-G). 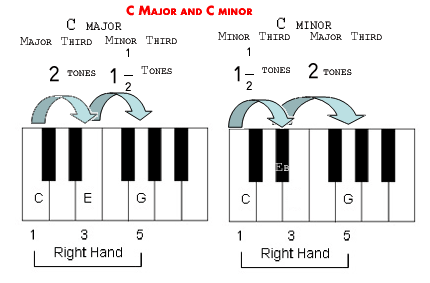 The minor third intervals in the minor piano chords which defines the chords as minor. sounds more mellow and melancholic in comparison with the major third of the major chord and that's why the minor chords are being often interpreted in music as the sad, mellow ones.

Play a C minor chord, Listen to sound of the chord and try to identify and keep the mood of its sound in your ear.

Tip: If you're having difficulties with finding a certain minor triad, seek for the major chord first and then lower the major third into a minor third.

Remember: Developing your musical ear is the key to success on the long run. That's what we are aiming for.

When we'd like to state a minor chord, C minor for example we'll write the root note in a big letter just as we did with the major chord and we'll add a small m letter next to it.
C minor would be written as Cm for example.

So to conclude, in order to find a minor piano chord we should basically work intuitively and confirm our trial by checking out if we play the right notes according to the formula (A minor third and a major third on top of it.)

Work in Steps: First find the minor third (One and a half tone), then complete the chord with a major third. And other way around to do it is play the major chord and lower the middle note in half a tone. 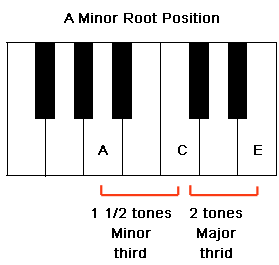 Now that we know how to build minor piano chords on the theorotical level and we have an impression of how a minor chord should sound let's try to built an A minor chord.

What we have to do is take the A key as the key note of the chord and count one and a half tones (a minor third) in order to reach the next note.

We end up with the C note. Now let's count 2 tones from C to look for the major third. So A minor chord is made out of the notes A-C-E.

Here's a handy list of all minor piano chords in the root position. 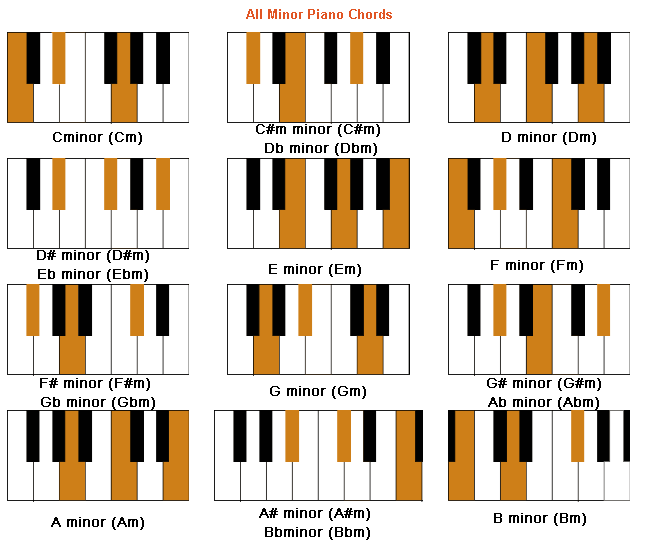