The dynamic music signs refer to the loudness or softness of a sound or a note. 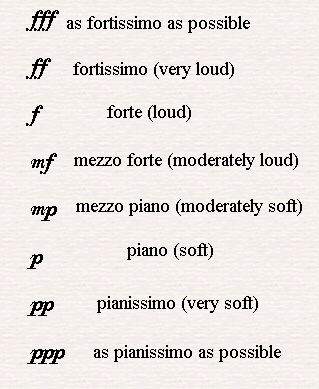 The piano itself is called after the Italian word soft and was originally called forte-piano after the first piano, created in 1791 by Bartolomeo Cristofori.

Piano-forte means loud-soft in English. How come Cristofori named the first piano so?

The answer lies in understanding the development of the instruments through history. Until that time no instrument was able to provide such tremendous range of dynamics.

The technical mechanism of the first forte-piano allowed the piano to produce very loud and very soft sounds for the first time.

The first Dynamic signs we're going to discuss are music forte and piano.

Now one has to understand that the issue of musical dynamics is relative. Playing loud depends on the ability of the instrument to produce volume. The flute for example can't play very loud in its lower register. However in the higher register it is naturally bright and so it is not so often that you will encounter a piano sign in its highest notes.

To conclude, more lies in the words music forte and piano. Forte is not only playing loud but also playing strongly or deeply while piano means playing soft, weak or carefully.

One should remember when playing piano that he still has to communicate.

The public still wants to hear the piano when you play soft. It's just that instead of playing loud, imagine the piano is whispering. The crowd should be interested in that whisper and move forward in his chair looking forward to hear the beauty you're producing. All in all, a different sort of music piano should be played on a small room and a concert hall for example because of the acoustics, the number of people listening and their distance from the piano.

The piano as opposed to the flute is able to produce different ranges of dynamics in all different registers of the instrument (although the highest notes are very thing and the lowest notes are rather muddy).

How to Produce Forte and Piano on the Piano?

What you should AVOID, is pushing the piano key instead of falling into it since you must understand that once you hit the piano key you can't control the volume or the nature of the sound you created (Since the hammer already hit the note and was drawn back to let the string resonant.

When you'd like to produce a piano sound you should fall more slowly to the key. I often tell my students to caress the key. You should understand that the falling is still there.
Some hold their wrist since they're afraid to produce too much volume but that causes too much tension to the hand just like pushing the piano key when playing music forte .

Now what are the dynamic signs are trying to tell you?
Most of the classical composers imagined an orchestra when they wrote their piano pieces. You can say that a piano piece is often a script for an orchestral piece.

If that is so you can imagine that when you hear a trumpet, playing music forte, it's right there in your face while when the woodwinds play piano, it takes time before their sound is fully fulfilled since blowing a woodwind instrument takes more time.
So, when playing a soft piano sound it helps to imagine you're breathing just like a woodwind instrument while you have to blaze the trumpet when playing music forte.

Anyway, life is not black and white you know, and so other relative dynamic signs were added in time.

The word fortissimo and pianissimo applies to playing very loud and very soft respectively.
If you're expected to play as pianissimo as possible you might see three ppp one after the other and the same goes for fff (as loud as possible).

Now that you know all about music dynamics you probably wonder what would be the next best step in learning to read piano notes. If you want to learn more about reading piano notes you should definately check out the Rocket Piano Ultimate Learning kit. Rocket Piano provides an amazingly handy and effective piano course on various issues such as reading piano notes, playing piano by chords, piano technique and more.