The story of the early history of the piano starts with ancient man.
The piano is partly a stringed instrument, and partly a keyboard instrument. That's why its history grows in two directions.

The Development of Musical Instruments from Ancient Time, until 1907

Long time ago, ancient man discovered the first musical instrument while he was out hunting. First, he put a string on a forked bench, in order to create a bow.
Then he discovered that when he shot an arrow with it, he produced a tone. It was always the same tone. He then put two strings that had different lengths, onto the bench, and created the first born harp.
The bench curved and is what would give the harp and later, the piano, its curved figure.

When early man blew his blow gun, an interesting sound, completely different in nature to the strings, filled the air.
This was the beginning of blown instruments, like the flute.

In China, in around 2000BC, they combined a few pipes together and created the first pan-flute, which would later inspire a Greek engineer,

Ctesibius to try to produce more than just one note from each pipe. He created the first keyboard instrument called the hydraulis.

The hydraulis was the oldest ancestor of the modern day church organ. It utilized an air compression mechanism that was powered by water (hudor, in Greek). Like modern pipe organs of today, each pipe of the hydraulis was tuned to a specific tone, or 'note'.

The Monochord (6th Century BC)

In the area of stringed instruments, though, an interesting development had occurred way before that of the hydraulis. In the 6th century BC, an instrument called the monochord was used to measure intervals or musical distances. The novelty was that a single string was now stretched over a shallow sound box. A movable bridge could change the tone and volume in different positions. The idea of the sound box would take a stand in the development of the piano.

The Psaltery of Ancient Greece (Epigonion) dates from at least 2800 BC. However it was popular in the 14th and 15th centuries. Like the monochord, it too had a shallow sound box, but a few strings were attached to it and were plucked with the fingers or with plectra. A bowed version came later. This would lead us eventually to the harpsichord, which was also plucked.
But before we go on let's get to know the dulcimer...

The dulcimer, an ancient Iranian instrument which was dated even before Christ, looked just like the psaltery, but instead of being plucked it was struck with little wooden hammers! The wooden hammers were used to hit the strings and make them vibrate, just like hammers do on piano strings today.

Around the middle of the twelfth century (1157), you could already see an instrument called a Keyed Monochord. Through time, a few more strings were added to it and the "tangents" which were fitted at the back of each key could produce a few notes together when they created contact with the key. Eventually, it evolved into the form of the clavichord. The part of the string that didn't vibrate had a mute, so that when the tangent left the key, it was possible to damp the sound.

The Clavichord is the simplest and usually the smallest of all string-keyboard instruments. Initially, it had ten strings or so, and each string could produce two different notes because it had two tangents at different points. Later on, each string had just one tangent. In order to damp the sound they used a strip of felt or cloth.

Steel appeared only toward the middle of the 14th century although at first it was used for the strings. Instead, they used gold, silver, brass, gut and horsehair. Today, nylon is also used. It was only in 1835 that the use of steel for strings became more definite.

The Church Organ (Starting from the 8 Century AD)

If we go back to the first few centuries AD, we discover that much has happened in the organ world. During the time of the Greeks and of the Roman Empire, the hydraulis consisted only of seven basic key notes (A, B, C, D, E, F, and G). However, after the hydraulis was introduced to the western Catholic Church during the eight century AD, it would slowly evolve into a musical instrument with an entirely different appearance and an updated piano key layout. 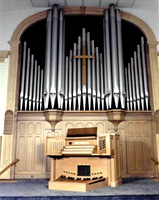 The Church Organ was the first keyboard instrument to use all twelve piano key notes (A, A#, B, C, C#, D, D#, E, F, F#, G, and G#), because the basic musical system was then fully defined. The weight of the keys has changed enormously. Organ players were originally called "organ beaters". Imagine that!

The arrangement as we know it today was first seen in paintings of a plucked Harpsichord, in 1361.

The harpsichord probably originated in Italy in around 1420. Its strings are plucked from a keyboard which sits on a table or stand while being played. They have been made in varying shapes and sizes over the years. They were called Virginals in Elizabethan England, a term today reserved for harpsichords whose strings are parallel to the keyboard. Some harpsichords had strings that were plucked with a quill like the psaltery, some with metal plectra, and at least one had strings that were struck with a metal staple, in the manner of the dulcimer. 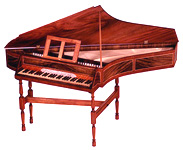 The spinet followed the clavichord, and then came the more elaborate harpsichord. It might have been named after the Italian inventor, Giovanni Spinnete, or from its connection to the spine thorns which were used to pluck the strings. In 1682, Henry Purcell was the organist of the Chapel Royal in London. Back then, the spinet was more popular then the virginal in the UK, because of its large compass and its powerful tone. That's what Purcell used to compose some of his music.

Being a member of the harpsichord family, the strings of the spinet were plucked by plectra attached to jacks. In terms of shape, the spinet provides the link between the box-like virginal and the elegant harpsichord proper.

That is more or less the end of early piano history. In the early 1900s, the piano was invented. Want to know by whom?? Click here to continue, and learn about the guy who invented the piano.

Return from Early Piano History to History of the Piano