Who Invented the Piano?

Home » History of the Piano » Who Invented the Piano

We will learn about the inventor of the piano on this page, and how he affected the future to come. 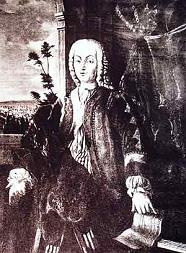 1709 is a major year in piano history, for it is believed to be the year the "pianoforte" was probably invented. In an article about the "gravicembali col piano e forte", or harpsichords with soft and loud, created by Cristofori, a writer called Scipione Maffei wrote:
"Everyone who enjoys music knows that one of the principle sources from which those skilled in this art derive the secret of especially delighting their listeners is the alternation of soft and loud."

Bartolomeo Cristofori was born on May 4 (1655-1732). He became a harpsichord maker and a designer, and by 1688, his reputation brought him to the attention of Prince Ferdinando de Medici of Florence, son of the Grand Duke of Tuscany. The prince owned forty harpsichords and spinets, and hired Cristofori to both curate the collection, and build new ones. Cristofori became the custodian of the instruments in the court in starting from 1690.

Around 1700, he began to work on an instrument on which the player could achieve changes in loudness just by changing the force with which the keys were struck. Instead of the quill jacks used to pluck the string on the harpsichord, Cristoforis' innovation was to devise a way in which the strings were struck from below by individual hammers covered in deer leather. He had created the first two harpsichords with the first real escapement mechanism.
What is that exactly?

The new thing with this "escapement action" was that strings of the harpsichords were not plucked, nor had a "tangent" action like the clavichord had. Instead, a hammer hit the string, which is why these instruments were also called hammered harpsichords.

By 1726 he seemed to have fitted a stop for the action to make the hammers strike only one of two strings. The hammers were made out of deer leather and the simple escapement enabled the hammer to escape from the string instead of blocking it, and, by that, allowing the string to vibrate smoothly.

In this escapement action, the hammer moves freely, that is, it is not under the direct mechanical control of the performer when it actually strikes the wire, and as a result, it is free to fall back to be stopped by the action, and be ready to strike again.


That was a major problem that would bother piano makers in the next century too! If a piano player would like to repeat a note, it took some time, for the hammer had to go all the way back and then to be struck again. Cristofori would later add a padded check to catch the hammer on when it returned from the string. Piano players though, still couldn't control the key from the moment it jumped to the key and back.

Cristofori's hammer mechanism, however, was so well designed, that no other of comparable sensitivity and reliability was devised for another seventy-five years. In fact, the highly complex action of the modern piano may be traced directly to his original conception.

Cristofori's patron, Ferdinando, died in 1713, but he remained curator under the prince's successor, Cosimo III. In 1716, Cosimo named him curator of all musical instruments in the Florentine royal collection.

Cristofori made about twenty of his pianofortes between 1709 and 1726. His instruments had bi-chords throughout, and all the dampers were wedge-shaped. He is presumed to have gone back to making harpsichords, probably from a lack of interest in his pianos. His pianos were still too big and too close to the harpsichord.

It would only be later on, that the piano would evolve into a more comfortable size, and get its own distinctive identity. During the early 18th century, the prosperity of the Medici princes declined, and like many of the other Medici-employed craftsmen, Cristofori took to selling his work to others. The king of Portugal bought one of his instruments.

In 1726, the only known portrait of Cristofori was painted. It portrays the inventor standing proudly next to what is almost certainly a piano. In his left hand is a piece of paper, believed to contain a diagram of the piano action. Unfortunately, the portrait was destroyed in the Second World War, and only photographs of it remain.

Cristofori continued to make pianos until near the end of his life, continually making improvements in his invention. In his senior years, he was assisted by Giovanni Ferrini, who went on to have his own distinguished career, continuing his master's tradition. There is tentative evidence that there was another assistant, P. Domenico Dal Mela, who went on in 1739 to build the first upright piano.

In his declining years Cristofori prepared two wills. In the first, dated January 24, 1729, he gave all his tools to Giovanni Ferrini. In the second will, dated March 23 of the same year, he changed his mind, leaving almost all his possessions to the "Dal Mela sisters ... to pay them for their devotion during his illnesses and, and also in the name of charity." This will left the small sum of five scudi to Ferrini. The inventor died on January 27, 1731.

On his death, a theorbo player at the Medici court named Niccola Susier wrote in his diary:
"Bartolomeo Crisofani, called Bartolo Padovano, died, famous instrument maker to the Most Serene Grand Prince Ferdinando of fond memory, and he was a skillful maker of keyboard instruments, and also the inventor of the pianoforte, that is known through all Europe, and who served His Majesty the King of Portugal [JoÃÂ£o V], who paid two hundred gold louis d'or for the said instruments, and he died, as has been said, at the age of eighty-one years." [trans. Stewart Pollens; Cristofori was actually only 76 at his death] 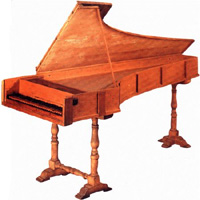 Three of Cristofori's pianos survive: one at the Metropolitan Museum of Art in New York City (1720, 89.4.1219); one at the Museo Strumenti Musicali in Rome (1722); and one at the Musikinstrumenten-Museum of Leipzig University (1726). The Metropolitan's Cristofori, the oldest surviving piano, outwardly resembles a harpsichord. It has a single keyboard and no special stops, in much the same style as Italian harpsichords of the day. It has 54 keys, a nd thinner strings and hammers than today's pianos, giving it a sound closer to a harpsichord than to modern pianos.

Gottfried Silberman (1683-1753) also made two pianos similar to Cristofori's but they were too big and heavy. Bach, for instance, didn't like it at all at first, only changing his mind much later. The piano became more popular in the late 17th century, when people were more open- minded to a broader melody. The tendency to be more expressive with an increase or decrease in volume and accents, made it possible for the popularity of the piano to gain momentum.