Three Chords and the Truth

In this piano lesson we're going to discuss the most basic chord progressions. Click on a certain chord progression if you'd like to know specifically about it or read the whole lesson through (Which I highly recommend to do).


Three Chords and the truth, that's all you need in order to start playing piano. This lesson is a natural step to go through once you've learned about the basics of chord theory.

If you started our piano chord lessons from the beginning you might be wondering why I'm suddenly mumbling about the concept of three chords and the truth. We covered many chords by now and suddenly I come with a strange statement like that?
That all you need is basically three chords?

Yes my friend, the truth is that life is full of contradictions. It's complicated and simple at the same time. In the world of harmony many chords exists, it's a reach world. However the connection between all the chords in the world comes down to three chords and the truth.

Huh? Does it sound like Hebrew to you? Well, what do you know? I happen to speak Hebrew fluently :)
So let me explain the concept of three chords and the truth in details.

To begin with I'd like to explain the meaning of a progression in western music.

When we speak about a certain progression we mean that something has to start from a beginning point, develop in a certain way and reach somewhere.
Let's see how we implement this with the three chords and the truth.

The Tonic - Three Chords and the Truth

The tonic is the first degree we're going to deal with. It is the first out of the three chords and the truth.

When we speak about common harmony (music has developed in many other ways where chords don't always apply) we tend to start a song from the root chord.

We recognize the root chord as the first triad built upon the scale degree.
In this lesson we'll take the C major scale as an example and therefore C major as the root chord. Later on we'll discuss all the other major scales (All the rules apply in the same way... but let's take it one step at a time).

So, when we speak about C major as the beginning point we actually say that this chord contains no tension within its voices. Its notes don't attract towards any other chord. It's a pure chord and a great starting point to start with since all the voices within the chord feel at ease.

Basically what we're doing when we play chords is start with the root chord, for example C major, play some chords along the way that will create interest in the harmony and end up with C major again. The first degree of the chord is called "Tonic Chord".

The Dominant Chord - Three Chords and the Truth

Let's move on to the second chord within the three chords and the truth. So far so good; now, every story with a good end must have a climax. In music the fifth degree of the scale is a climax, in C major scale, G major. 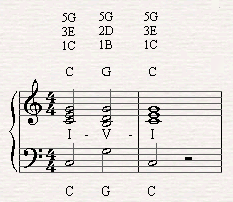 Perhaps the most basic chord progression is this one of I-V-I.


Click here for a free piano chord chart of the I-V-I chord progression in all major scales.


Some chords however, might appear in between in order to create more interest between these two chords.

The Subdominant Chord - Three Chords and the Truth

The subdominant is the last chord in the series of three chords and the truth.

Well, that is also pretty simple. All we do is try to suspense the tension until it is unavoidable to ignore the necessity to play a dominant chord (fifth degree remember?). So, in other words we find substitutes for the dominant. The fourth chord is the strongest example for such a substitute. That's why it's called the subdominant. 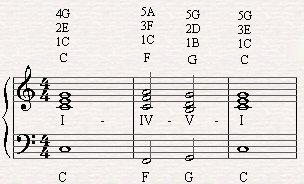 Here is how this chord progression could be played on the piano in C major scale.

Maybe the most common example to show this is the ending of a prayer we all know...
We start with a subdominant that is holding the tension before it's unavoidable to play the fifth degree towards the tonic. 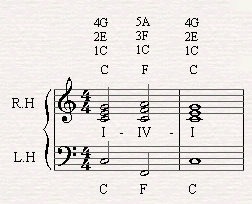 By the way, it is also possible to play such a chord progression: I-IV-I or in C major for example C-F-C. In this chord progression the tonic is moving to the subdominant and then moving back to the tonic without creating a climax. The only impact which is created is the postponement of the tonic.


Click here for a free piano chord chart of the I-IV-I progression in all major scales.


The song Imagine by John Lennon starts with this chord progression.

Another option that can be created with these three chords is to play the following chord progression. I-V-IV-V-I. 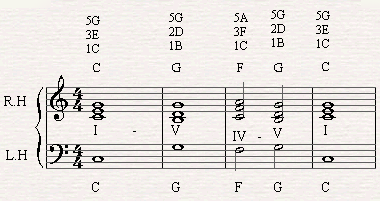 In this chord progression we move from the tonic to the fifth degree. Now as we've learned we must come back to the tonic again. However it's possible to postpone this verdict by moving the Sustain chord and then going again to the dominant which now increases the tension to the tonic.

Now let's see how the different chord progressions occur in some other music we're familiar with. 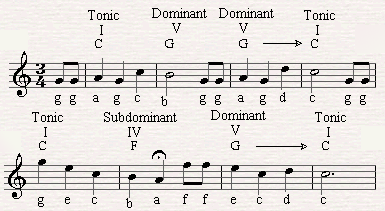 This is a classic example. The song starts with the tonic, C major; then is progressing to the dominant, the fifth degree of C major scale, G major and after eight counts going back to the tonic.

Then another line starts from the tonic. Then next chord is the subdominant, the fourth degree, F major which suspense the tension before the dominant appears again and demands us to move back to the dominant. There you have it; three chords and the truth. 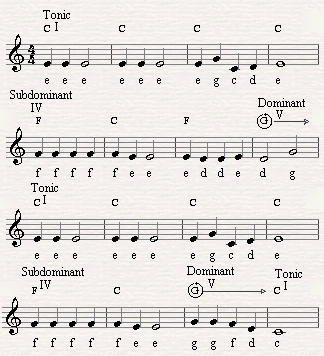 Jingle bells starts with four chords of the tonic. Harmonically speaking not much is happening. It starts to get more interesting when we're moving from the tonic to the subdominant in the fifth bar and then go back to the tonic.

The dominant wants to go back to the tonic. Since the dominant is located at the end of the second line it gives a feeling that the song is not over yet. There is a lot of tension waiting to be solved. 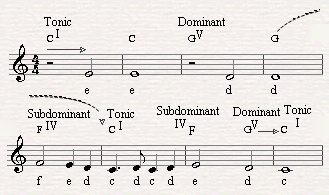 Let's check the song One Love by Bob Marley. Bob was terrific at making amazing songs with three chords and the truth which gets here a double meaning. Not only he made music with the concept we've learned during this lesson, he also combined his spiritual vision through his words and soul and made this song a piece of art.

This song starts with a tonic and going directly to the dominant.
Remember what we said about the dominant? Now we know that the chord progression will be pointing toward the tonic again.
What Bob does is play the subdominant after the dominant.
He inserts a substitute to suspense the tension but then he has no choice but going home back to the tonic.

Now you may ask; once we've reached the tonic we should be at home. How come there are more chords afterwards?
Well that has to do with the fact that music is symmetric.
A musical line is often built out of four bars of four counts.

Bob has reached the Tonic at the third bar but he still had two more bars to go.
That's why he has added the subdominant for two counts, then the dominant for another two counts and then the unavoidable tonic which now at the end of the line sounds like a real resting point.

Now that you know all about the three chords and truth behind chord theory you can easily play by ear many songs that have only three chords. All you have to do is trust your ear and relate to the logic of what I've been teaching you.
That's what the next piano lesson is all about.

Now that you understand the concept of three chords and the truth probably want to go further with playing piano by ear. I've stumbled across the perfect resource for you. It's called "Piano By Ear For Starters" and it's a 2-hour comprehensive audio program that will show you, step by step, how to get started playing the piano by ear.

You'll study everything from the basics and fundamentals, to chords, patterns, and even a few songs by the end of the course. The instructor's knowledge and unique ability to break things into simple formulas is second to none. You have to hear the free audio examples for yourself. I think there's a lot to be learned just by listening to those at their site.

Click here to check out the "Piano By Ear For Starters" Now!