The Bach Inventions and Sinfonias

This famous and beautiful collection of Bach was actually written as exercises for his students. It includes a total of 30 pieces: 15 Inventions for two different voices and 15 Inventions for three voices (the latter are called Sinfonias).

What are Bach Inventions in two different voices? 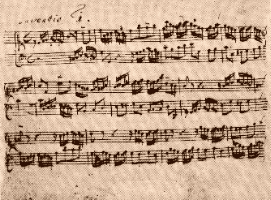 These are short pieces in which two different melodies are played simultaneously. Usually, the right hand plays the higher voice, and the left hand plays the lower one. In each Bach invention, there is a motive (a short musical idea) that is repeated in various forms - each time slightly different, and is developed through the whole piece. The two part Bach Inventions are much more famous than the three part Bach Inventions.

What are Bach Inventions in three different voices (Sinfonias)?

These are similar to the two voice Bach Inventions, but with an additional voice, so the music becomes richer with the harmony, the counterpoint and the whole sound. We said before that in the two part Bach Inventions the right hand takes the upper voice and the left one takes the lower voice. How do we play the third voice?

The third voice moves between the hands. Sometimes it is played by the right hand, and sometimes by the left. (Complicated? well, it is not easy at all but it can be done). There is a wide range of piano skills that are being explored in the different Bach Inventions, such as the ability to emphasize one hand over the other, playing different articulations and other coordinational skills. The Bach Inventions are exercises, but they became masterpieces because of the way Bach composed them with richness in harmony and counterpoint.

Here is what Bach said about this collection: "Honest method, by which amateurs of the keyboard - especially, however, those desirous of learning - are shown a clear way not only (1) to learn to play cleanly in two parts, but also, after further progress, (2) to handle three obligate parts correctly and well; and along with this not only to obtain good Inventions (ideas) but to develop the same well; above all, however, to achieve a cantabile style in playing and at the same time acquire a strong foretaste of composition." I would like to clarify an important point in Bach's quotation: "cantabile style in playing".


What does "cantabile style" mean?

Cantabile comes from the word in Italian 'cantar' - to sing. Bach asked his pupils to express their feelings while playing as if they were singing. When you play Bach's music or any kind of music, you are not just reading sheet music; you actually express feelings from your soul. When Bach asked for Cantabile, he wanted his students to convey their emotions as singers do, and to play with love and passion.

The Bach Inventions are exercises, but I think that these pieces should be treated as beautiful independent compositions in which the magnificence of the music should be taught as well.

The Inventions and Sinfonias are arranged in a chromatic key order, starting at C major as in the "Well Tempered Clavier"...

The "Well Tempered Clavier" contains pieces in all twelve scales- major and minor (a total of 24 scales).

In the Inventions and Sinfonias there are only 15 scales (C major, C minor, D major, D minor, E-flat major, E major, E minor, F major, F minor, G major, G minor, A major, A minor, B-flat major and B minor). What is the reason for this?

The answer is that before tempered tuning of the piano, the 24 scales existed only in theory, but actually only 15 of them in effect were used. Bach used all the scales that he could in the Inventions. Later, when tempered tuning was applied, he wrote the masterpiece "The Well Tempered Clavier" which contains Preludes and Fugues in all scales. This page includes all the Inventions and Sinfonias. You can hear them just by clicking on them, and also download the music sheets.

Choose the version that you prefer.


Click here if you haven't signed to Piano Playground, our free E-zine yet make sure you do that in order to get the username and password codes for the piano sheets we provide here under.

If you experience problems reading these piano notes you should definately check out the Rocket Piano Ultimate Learning kit. Rocket Piano provide an amazingly handy and effecive piano course on various issues such as reading piano notes, playing piano by chords, piano technique and more.