The diatonic circle progression is once of the most common progression you'll see in pop music. During the previous lesson we've learned to form four voices seven chords. In this piano lesson we're going to start using 7th chords in our chord progression. That means we're getting into jazz music!

Today we're going to use these wonderful colourful chords we've learned in the diatonic circle progression and play some great songs like "I will survive", "Autumn leaves" and more...

In the previous piano theory lessons we talked about the most basic progression in every type of western music; the I-V7-I.

In this following progression we're going to move from the tonic (I - first degree) to the dominant seventh (fifth degree - V7) which creates a tension back to the tonic that brings a musical phrase to conclusion.

The fifth degree is falling five steps to the first degree and that's why it is called a cadence. The word "Cadence" in Italian means falling. When the Italian talk they tend to drop their pitch in the last syllable of their sentence. That's where the logic of this term derives from.

Here's how the bass line looks like when a falling of a fifth is performed. It is moving five steps down from G to C. 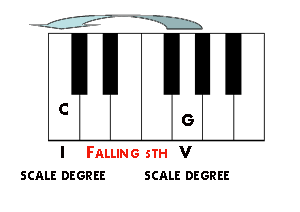 We also talked about the II-V7-I progression already which is a small expansion of this cadence. We stepped five steps from the second degree down to the fifth degree and then went to the first degree (Which occured again by falling five steps down). 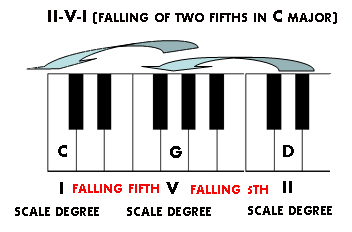 The diatonic circle progression is basically and expansion of this basic chord s stretched over the whole diatonic scale.

The most natural option is to continue to fall in fifths in the scale and go out to the tonic by reaching the G7 chord which is the true dominant of C major, like in this example below where we start from the sixth degree of C major (Am).

If we play a song in the minor scale like Autumn Leaves for example, (See below) we will continue in falling in fifths in the diatonic circle until we reach the Em chord. Then, instead of playing Em we will replace it with E7 which is the dominant seventh of Am. That would be our way to increase the tension towards the tonic and step out of the scale.

In this example we start from Am and we fall in fifths through the whole scale until we reach the E7 that leads us to Am again. If you don't play an E7 chord but Em instead (The natural Dominant of the minor scale) the impact of the fifth won't be strong enough to finish the process and so we will end up falling in fifths again until we add a dominant seven chord somewhere later.

Let's first see how we form this progression on the piano by using triad chords (three voices chords).

This scheme would clarify my explanations I'm sure...

Here's a free piano chord chart of the falling diatonic circle chord progression with triads in all scales.

Now all we've left to do is add the seventh notes of all these diatonic chords and make this great progression much richer. 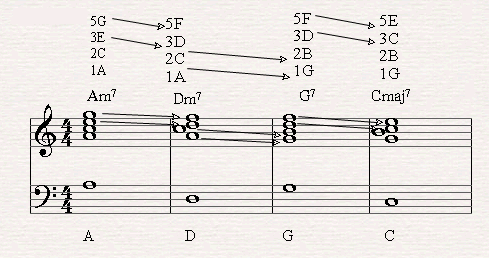 Here's a free piano chord chart of the falling diatonic circle progression with four voices chords in all scales.

Now I'd like us to see a few examples of famous songs that contain this chord progression.

Take Autumn Leaves for example... it is played in A minor scale.
In this song we're starting to play from the fourth degree of Em (Am). We fall in fifths in the diatonic circle of Em until we reach Bm (The natural Vth degree of Em).
When we reach B minor we will replace it with B7, the dominant seventh of E minor and this chord will encourage us to snap out of the scale straight to the tonic.

We replace it with Gsus7, which is a suspension chord leading to G7, the dominant seventh chord that tells us we have to snap out of the circle back to Cm. Then we start this chord progression all over again.

As you can probably see in this song I chose to demonstrate this chord progression with an other chord inversion so that you'll how we jump from Cm to Fm for example with all three voices (The lower two voices jump a third down and the upper voice is stepping one step lower).

When moving from Fm to Bb we will leave the F as a static note and raise the lower two voices of Fm (Ab and C) one step up. What we're doing is moving the voices just like we did in the previous example only vice versa.

All The Things You Are

I'll use the next song to demonstrate the diatonic circle chord progression with seven chords. 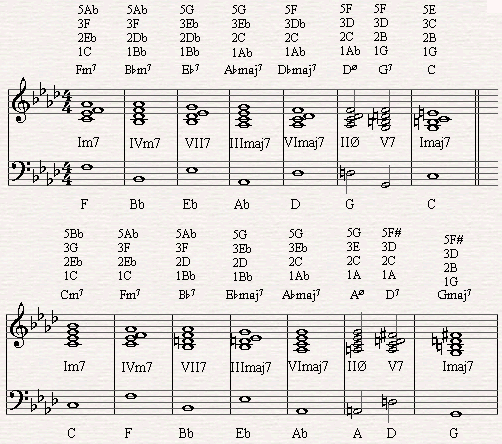 When we play the song "All the Things You Are" we start from the I degree of F minor (and we add the seven as a color). Then we fall in fifths again and again until we reach the sixth degree Db (with the major seventh as a color).

From this moment on we actually change our point of view. We now want to go to a new scale, C major. So from the sixth degree of F minor we will go to the D half diminished chord which is the second degree of C minor and then we will fall a fifth down again to G7, the true dominant of C minor. The we will use C major instead. Why?

The ending of a musical line with a major chord instead of a minor chords (The natural tonic of the scale is called a picardy third.

We will start our next musical line in C minor and set it as the tonic chord. We will drop in fifths whithin the scale structure of C minor (with the seventh as a colour) until we reach the sixth degree Abmaj7(with the major seventh as a colour again), then move to the II-V7-I of G minor and We will end the line with G major (a picardy third again).

The Diatonic Circle chord progression will help you now to memorize the pattern of similar chord progressions. The biggest problem you face when trying to play a song smoothly is that you have to be able to remember all the chord shapes and switch between the different chords fast. The goal of learning to play the piano chords quickly could be achieved much faster with the help of the Rocket Piano Learning Kit that will help you to train your fingers to automatically remember all the chord shapes, in 1/3 the time!

You'll learn all about how your brain processes information, and how to maximise your piano practice time... (nine out of ten people are absolutely floored by this secret!). Click here to check out the Rocket Piano Learning Kit Now!