It's time to see some examples of chord progressions which occur on some popular songs.
If you've read my piano chord lessons you've gained much knowledge by now about the diatonic chords and the secondary dominants.

The last step in learning something new is seeing it on the surface and practicing it.

I'd like to start with the song "Killing Me Softly"

I love this song for its smooth presence and its wonderful text. We'll play the song in C major. Let's have a look. 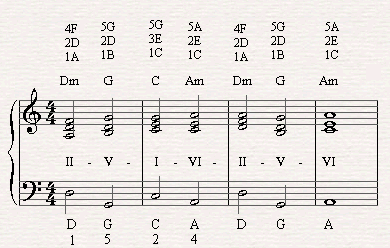 The song starts with a chord progression of II-V-I (Click to read about it).

Next we make a chord substitute two the VI degree, the parallel minor of C major.

We repeat this chord progression of II-V-I only now instead of going to the one we step right away to the sixth degree so we have a deceptive cadence. 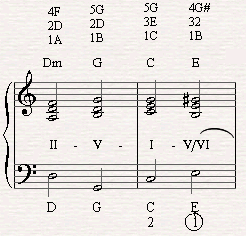 Now we fall in fifths from Am (VI) to Dm (II) and we continue in the diatonic circle. (Read about it in here) until we reach the tonic (I).

In order to pass to the chorus which is located in Am (The parallel minor scale of C major) we have to insert a secondary dominant. The dominant of Am is E7 so after playing the tonic we're going there. 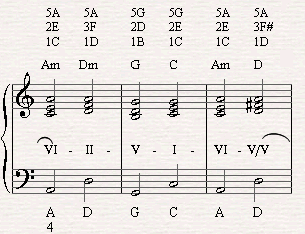 In the chorus we're falling in fifths in the diatonic circle from Am (VI) to the tonic (I). After that we step to Am again but this time instead of falling in fifth to Dm we replace it with a dominant seven chords D7 which establishes a new direction in the song. From D (V/VII) we naturally step to G (VII). 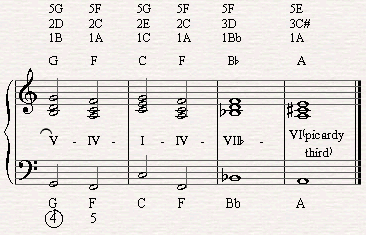 After G we move to F (VI)then we go to the C(III) and then again to the sixth degree (VI) and from here we're moving to Bb which is lowerd second of A minor.

What we basically did was playing the notes of the seconddegree (Bo B, D, F) Only we lowered the second degree of the scale in half a tone. We get a Bb chord.

From Bn we move chromatically to A. The chorus started in Am so how come we end in A major? Ah! We end with a picardy third to give the song a sense of finality.

This song is also a fantastic example for our chord progressions lessons.
We'll play it in C major again just to make things easier to follow. 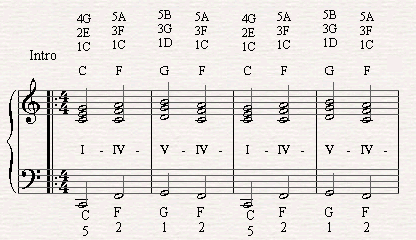 The song starts with an intro of I-IV-V-IV. We already talked about the fact that normally a subdominant can not appear after a dominant but hey, the pop world has its own rules. This repeats two times and the verse begins. 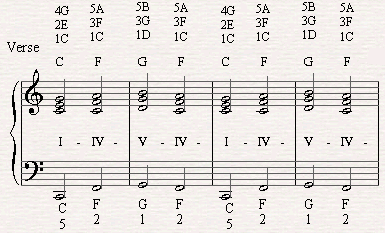 The verse starts again with the I-IV-V-IV for another two times. 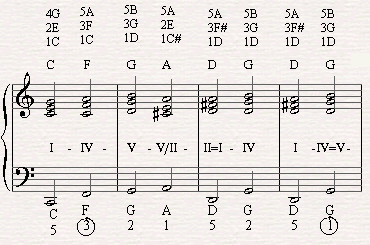 Next we repeat this chord progression but instead of going to F (IV) we move to A the secondary dominant of D major.

Now were going to play a chord progression of I-IV-I-IV in D major. Just to remind you, the dominant chord has taken us to a new tonality for a moment. We're now treating D as the first degree until we'll have a new chord that will tell us otherwise.

After performing two times the D-G-D-G (I-IV-IV-IV) we're going back to C major.
That makes sense since G is the fourth degree of D but also the true fifth of C major. 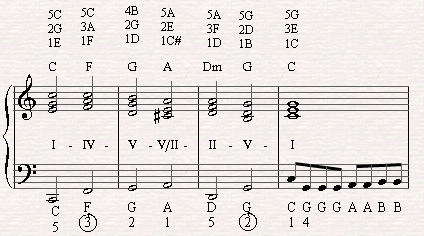 After we've reach C again we'll play C-F-G-Am so instead of going from G major (V) to the tonic we made a chord substitution and replaced it with its parallel minor chord Am (VI) which allows us to fall in fifth in the diatonic circle to Dm(II) the to G (V) and finally reach the tonic (I). 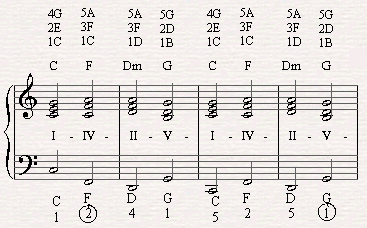 Its time for the chorus which is simple to explain. We start from the tonic (I) then we move to the subdominant (IV) and we make a chord substitution to Dm (II) also a subdominant thewe move to G (V) the dominant chord of C (I) the tonic. 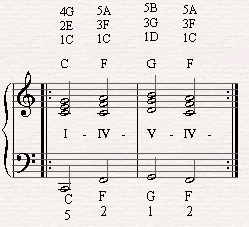 The song ends just with the same chord progression as in the beginning.

I'd like us to take a view at another great song called "I got rhythm". This song is great to demonstrate many chord progressions we've been learning. Click here to learn about the song "I Got Rhythm".

Return from Example of Chord Progressions in Songs we All Know to Piano Chords.