This is the third part of our jazz piano chords lessons. Click here to go to the first part where you'll be learn about adding the 9th.

Next in our jazz lessons we'll be learning to add the 13th note to a seventh or a major seventh chord (otherwise it would be the sixth note 7+6=13) adds a wonderful colour to the chord which is often being used in jazz chords.

The chord symbol of this chord is stated by the big letter C and a small 7 and 13 on the upper right side of the letter.

After we omit the root note from the bottom (octave between the bass and the bottom of the chord) we're left with E, G, Bb and A.
(If you're not sure why we're doing this you can check the first part of our jazz lessons in here.

Not!! We get again three notes located too close to each other. Let's look for a better chord inversion that would create more space between these notes. Maybe we can raise it to the next chord inversion just like we did earlier in the previous jazz lessons.

The next chord inversion doesn't help us too much since the fifth note is being played in the bottom of the chord and since we still get three close notes.

But we can do something about it.

During the previous jazz lesson we've learned the when space is needed between the note we can create by omitting the 5th. Click here to preview this lesson if you haven't read it yet. Let's try it here.

Almost perfect! Only now the sixth note is located in the bottom of the chord. Let's take this chord another chord inversion higher and see if we get a better result.

Now the seventh note is located in the bottom of the chord and the sixth note is distanced on top. This is the best way to play a thirteenth chord. 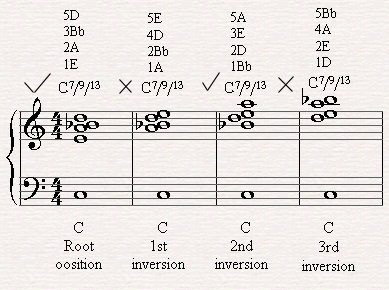 Let's add another extension to the chord. Thirteenth chords mix lovely with the ninth as well.

Chords With a 6th

When the seventh is not present in a chord we can't call thirteenth note so. Instead we count it from the root note and we name it the sixth note.
Let's take the sixth note in C major A.

Added to a triad here's what we get after omitting the root from the bottom of the chord. 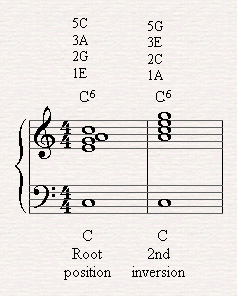 A is the parallel minor of C. This chord could be names as the first inversion of Am7 as well.
The sixth note (and the second note by the way) is more neutral in its color so in pop music and jazz music it is often recommended to use it. 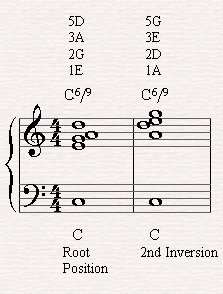 The first jazz chord of many jazz pieces will often be a 6/9 chord. These extensions add color but they leave room for alternatives of harmony and if a singer sings as well this chord will support her much better.I introduce here the root position and the second inversion since they are the ones being used.

In this page I introduce an example with the C7 and Cminor7. If you need help locating all the other jazz chords I suggest you use our wonderful chord generator (coming soon). Always bother to understand where the chord is coming from though. Click here to go to the chord generator.

Now that we know how to build the different jazz chords let's start combining them together. Click here to learn how to play common jazz chord progressions(coming soon).