This lesson is a natural continuation to the Major 7th Chords Piano Lesson so make sure you went through that one before you drop by in here.

The principle that stands behind adding the 7th note to a chord is simple. We're looking for a way to create more tension towards the next note.

This appears very clearly in major 7th notes. When you add a 7th note to a major chord you often make it a DOMINANT CHORD. It means that you switch the function of the chord from being a restful chord to becoming a chord so full of tension until that there's no solution but solving this chord to its relative home chord.

Sounds complicated? Don't sweat about it too much. We're going to talk about it in details when we deal with Piano Chord Theory. For now, all you need to know is that the 7th note adds a lot of tension to the triad chord.

How to turn a minor chord into a minor 7th chord? Easily! simply take a minor chord and add a minor third on top of its upper note. That's how we create a 7th chord in the root position. 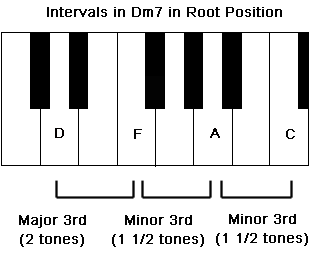 So if we take an Dm chord for example which is built out of the note D,F and A, all we need to do is add a C note above A and the distance between A and C makes a minor third. The notes D,F,A and C create a Dm7 seventh which is a minor 7th chord.

Now what I'd like you to understand is that minor chord are less dominant than major chords to begin with. So when you add the seventh note to a chord you do spice up the chord but you won't make turn it into a full dominant chord which would be the case for adding the 7th note to a major chord.

A minor 7th chord is stated by the following chord symbol. You'll see the letter that stated the key note of the chord followed by a small m the number seven right after it. A G minor 7th chord for example will be written as Gm7.

In the next piano tutorials we're going to add minor 7th chords and play them in different Chord Inversions. If you're unsure whether you know how to play a certain 7th chord in the right chord inversion you can click on the link that directs to that specific chord and you'll find all possible chord inversions in that page.

Here's a handy chord chart of all minor 7th chords in the root position. 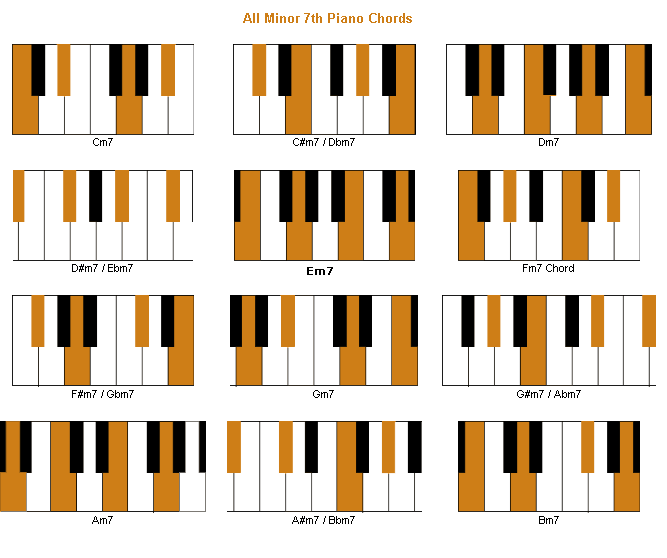