Welcome back! This piano lesson is dedicated to studying how to perform different musical phrasings. We're going to learn to connect between two piano keys in four different ways. 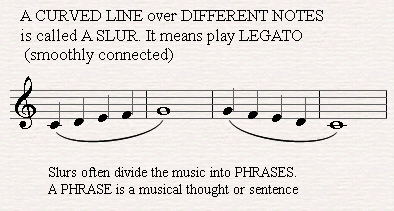 The Italian word "Legato" (literally meaning tied together) indicates that musical notes should be played or sung smoothly. In other words when you play legato there should be no silence as you move from note to note.

Legato means also that you have to perform a musical line in a graceful, connected style, as opposed to staccato. Legato is often indicated by a slur drawn over the effected notes or as a line over the notes which are meant to be performed in this manner.

The accurate way to perform this musical phrasing of on the piano is by pressing a finger, then pressing on the next finger and while the second finger is half way pressed on the piano key, you lift the first finger up.

The slur has two purposes in musical pieces. The first one indicates that a musical phrase should be played in a legatomanner and the second purpose is to state the beginning and the ending of a musical line.
So if you happen two see two identical notes (Like to C's one after the other) in the middle of a slur you could wonder how you're supposed to play them legato.
You must lift your finger in order to allow the second key to be heard again so how can you connect them without a pause?
The answer is that you have to imagine the line as a whole and keep the first note pressed on the key as long as you can before you lift it and move to the next key.

One shouldn't however mix playing legato with TIED NOTES 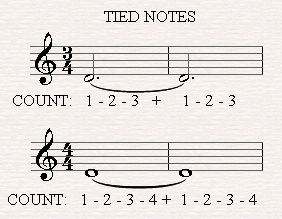 When notes on the SAME LINE or SPACE are joined by a curved line, we call them TIED NOTES.

The key is held down for the COMBINED VALUES OF BOTH NOTES.

When we're asked to play Legatissimo we're supposed to perform a certain musical phrasing of a passage in an exceedingly smooth and connected manner more so than legato.
Legatissimo is often played in ballads in order to create a warm and intimate expression in the melody.

The accurate way to play the Legatissimo musical phrasing on the piano is by dropping a finger down, then dropping the next finger, keeping them both pressed for a slice of a moment before lifting first finger up (and not half way of the piano key like legato.)


3. Performing a musical phrasing of Staccato

The Italian word Staccato (literally detached) indicates that notes should be separated in a detached and distinctly separate manner. In other words there is an interval of silence between every two notes but the rhythm is not affected by it.

When you see the Staccato musical phrasing sign you should basically drop a finger and create a relative short tone length then lift your finger and drop the other finger once the first finger has left the key completely.

Staccatissimo is a style of playing notes in a detached, separated, distinct manner that shortens the notated duration of the note in a more exaggerated way than normal staccato. The tone length of each note is very short.

You can compare it to pizzicato in strings which means that you pluck a string rather then playing on it with a bow. The sound is more affected by the ATTACK then the duration of the note.

You can perform this musical phrasing by falling to the piano key as quickly as you can without staying enough time to create a real tone length.


How to Practice These Four Musical Phrasings?

Left Hand: Repeat the process with your left hand. This time put your fifth finger on the lower C and the other fingers respectively.

Counter Movement: Once you're done, try to play this exercise in a counter movement. Place both your thumbs on middle C and move to the second finger of both hands at the same time. Both hands are using the same fingers but playing different notes in counter movement.

Move on to the second finger in the right hand and to the fourth finger in the left hand at the same time in a legato manner (Make sure you're not creating any pauses when switching between the two keys).

To conclude, every E.D (every day) exercise should be played in four different ways. Starting with the right hand apart, going to the left hand, counter movement and finally parallel movement.

Double that with the four ways we've learned and you'll see that you have plenty of work to do in the coming few weeks :)

The next piano exercise is for more advanced piano students. Once you're able to connect between two piano keys in four ways, try to challenge yourself by playing different accent marks on each hand.

Place your hand just like you did in the previous exercise when you played with both hands in a parallel movement.
Play legato with the right hand and staccato with the left hand as you ascend and descend.


When you play Legato, there should be no silence when moving from note to note.


3-4 Both hands are playing Legato at the same time in the next two exercises.

5-6 The next exercises focus on playing Staccato with each hand separately.
The notes should be played with a bouncing touch. Make sure that the notes are short and detached.

9 Mixing Staccato and Legato - In these exercises you're supposed to play legato with one hand and then staccato with the other. Each hand plays separately

10 In these exercises both hands are playing at the same time, switching between playing two different musical phrasings, legato and staccato.

11 Advanced: In these exercises one hand plays Legato while the other plays Staccato. (It will help you to develop the independence of each hand!).


Click here if you haven't signed to Piano Playground, our free E-zine yet. Make sure you do that in order to get the username and password codes for the musical Phrasing Exercises I provide here under.

The more advanced students can play some of the five fingers exercises with different musical phrasings in the following manner:

Are you having a problem with implementing the different musical phrasings? If you want to improve the co-ordination and independence of your fingers while gaining each times a faster finger speed you must check out the Hannon Finger Exercises Piano Course.

In this DVD, the exercises are demonstrated by an accomplished instructor, James Wrubel, and broken down step-by-step in VIDEO format so that anyone with a dvd player or computer and 1 hour to spare can start using them right away.

I highly recommend you check out a sample of the first exercise on their website. Just that one sample exercise can dramatically improve your speed and precision. Click here to check out the Hannon Finger Exercises Piano Course Now!