Until today we have been playing musical pieceso that dealed with the white keys, but if you played a few songs on different places on the as I suggested to do in the Play Piano By Ear section you probably realized that you also have to press the black keys in order to get the melody right.

Later on we will discuss why this happens but first let's name the black keys.


"Are we not formed, as notes of music are, for one another, though dissimilar"? ~Percy Bysshe Shelley

The next musical piece, Symphony in D minor by Cesar Franck has a G sharp in the opening theme. 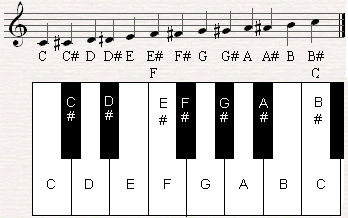 All the Sharps are notated and shown in a logical order in this next image.

When a sharp (#) note appears before a note, it applies to that note for the rest of the measure. Look at how "Ode to joy" could be notated for example... 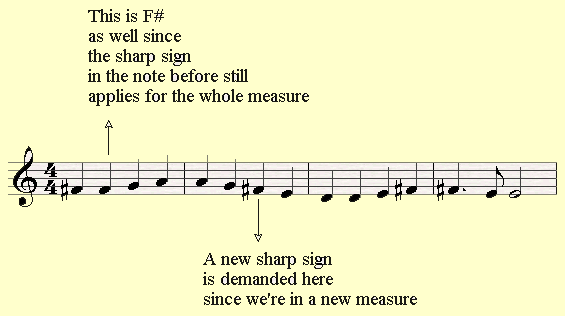 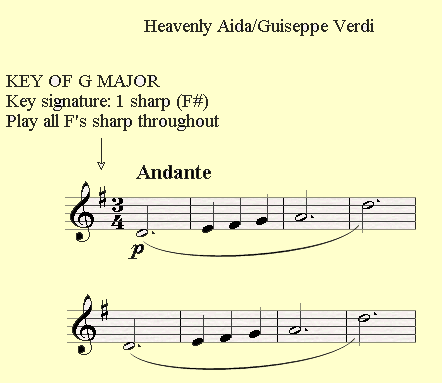 Sometimes, a piece will have a certain pitch sharped throughout.
Musical scales are a formula of whole notes and half notes.

A piece will have a sharp sign throughout because it is written in a certain musical scale that involves that raised note as a part of its formula.
We're going to discuss musical scales later on in our piano lessons, but for now, I'd like you to notice that that the sign of that sharped pitch would be indicated at the beginning of a piece, in the KEY SIGNATURE instead of placing a sharp before each and every note of these certain pitches.

Now let's play a few pieces with sharps and flats.


Click here if you haven't signed to Piano Playground, our free E-zine yet. Make sure you do that in order to get the username and password codes for the Sharp Sign Sheet Music I provide here under.

You're going to love the way they work systemically with the help of their useful audio and video files that are short and to t he point. By working with Rocket Piano you basically guarantee that you'll become pro at reading piano notes (And the big bonus is you'll learn to play piano by ear as well).
Check out the Ultimate Piano Learning Kit of Rocket Piano Now!