Shell Voicings - Spreading a Chord with Both Hands

Until today we learned here on piano play it to play the chords on right hand and the bass in the left hand.

We chose to do so since this gave us a clear idea on the basis of the chord and how everything relates to it.

Another reason to play only one note in the left hand is that the lower voices have many overtones and therefore they sound so muddy and unclear when they small intervals are played in the lower register.

Since only one note was played in the left hand and the rest of the chord in the right hand, in the middle register of the piano we overcame this problem in a very efficient way.

Today however I'd like to introduce a new way, called shell voicings, to play voicing with both hands which is commonly played in the piano jazz world.
The charm of the piano is that you could use both hands to spread a chord and create new interesting voicings.

What's a voicing? When we voice a chord we recognize the individuality of each note in a chord as a part of an individual, horizontal melody rather then a resultant, vertical melody.

We'll see how we do that later on as I demonstrate some examples.

And why shell voicings? We use the term shell since the left takes over the oustide of the chord while the right hand plays its inside. 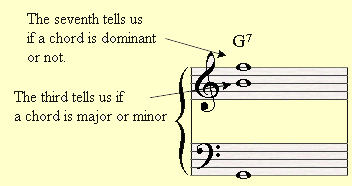 The fifth is a passive note in the chord. It's duty is to support the tonic in giving stability to the chord but it doesn't give us a clue on the functionality of the chord. 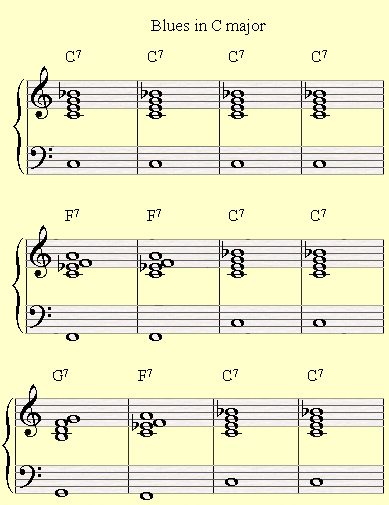 Let's take a blues in C major for example...
It is all built out of seventh chords so it's going to be handy.

The first chord of the blues in C major is C7.
Until today we played the bass in the lower register and the rest of the chord in the right hand.

Now I suggest two new options. The first one is to play the Bass and the seventh of the chord in the left hand and the third and fifth in the right hand.

The second is to play the bass and the third on the left hand and the seventh and fifth on the right hand.

Notice the both options suggest the basic note of the chord as the lower note in the left hand.

Now we have to examine both these options and see we one fits us best.
The first one is fantastic. There's a descent distance between the bass and the seventh and the left hand is located in an area on the piano where the interval sounds clear and not to muddy.
Don't you love shell voicings? :)

Let's see how we're doing with the bass and the third.

The second one is more problematic. There's a little distance between the bass and the third and it sounds quite muddy in that lower register of the piano.

The other problem is that there's quite a big distance between the third of the chord in the left hand and the fifth in the right hand. It will hurt the unity of the chord.

But is there a way to overcome these problems? Most certainly! 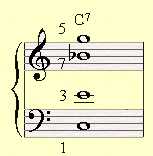 Those of us who us who have wide hands would be delighted to discover that by spreading the bass and the third over a third they'll create a beautiful orchestral sound.
Now there's a optimal gap between the bass and third that overcomes the muddy sound in the lower register.

However, I must warn you... If you have small hands, don't try this at home! :)
Stretching your hand inappropriately might cause lots of pain to your wrist and all and all there's enough way to play chords in beautiful way in closer positions.

But when can we play the third in the left hand. Ah, if we'll raise the whole interval in an octave it will sound lovely. Now, instead of playing the fifth and the seventh in the right hand in that order, you can first play the seventh and the fifth above.

Here we create once again a nice voicing with a great gap between the third and the seventh of the chord.

So to conclude, you have to consider each case individually and let your ear judge the result.

Now let's move on to the next chord in our blues scheme. After playing the C7 chord for four times we go to F7 in the fifth bar of the blues.

F7 could be played in these ways in shell voicings.

Now, remember that I told you about the nature of a voicing being a part of an individual, horizontal melody? Let's see how we handle it in our case. 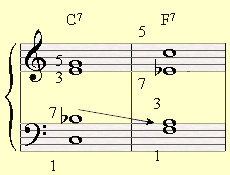 The seventh of the chord has to be solved to the third of the next chord chromatically.


If you're interested in knowing why, visit this page on dominant seventh chords.

Therefore, it will be most appropriate to solve the C7 to F7 like this:

See how the seventh note is leading to the third of the next chord? 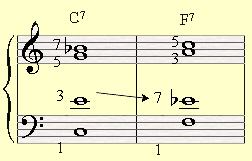 So the guiding rule is to find a chord that is located closely on the piano to the previous hand position we chose. 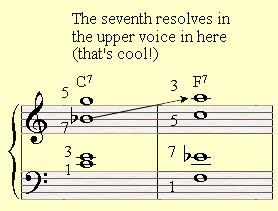 Here's the last option for a good shell voicing with the bass located an octave higher.

Now we said before that the seventh of a chord resolves to the third of the next one. In here we hear the solution in the upper voice. 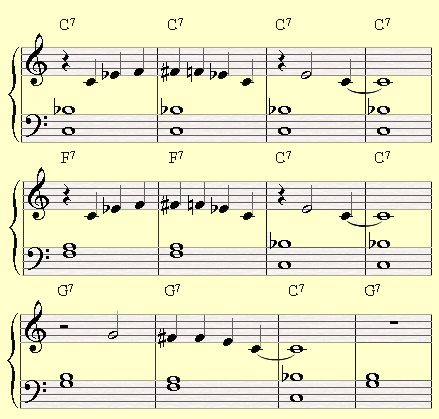 Now, you know what the great news are?

Remember how I told you that the third and the seventh of the chords are the most important parts of the chords?

So, try to finish playing the blues with shell voicings. Play a chord on each four counts in the left hand.

Once you're done with that we can experience with a tutorial that will show you how to play a song in shell voicings (coming soon...)