The History of the Piano from 1709

The idea of the piano appeared when Bartolomeo Christofori succeeded on fitting a keyboard to a string instrument. He did that by setting hammers that stroke the string and let it vibrate. Until then the clavichord was a popular happened around 1709. Click here to read more about Christofori.

When we speak about piano history we have to realize how piano action has developed through time.

The piano action of Christofori was simple. The hammers which were made out of Deer leather stroke the strings, and then a simple escapement enabled the hammer to escape from the string, instead of blocking it so that it could continue to vibrate. 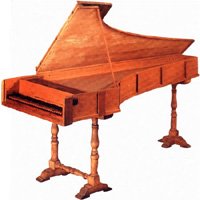 Christofori has made like twenty instruments or so in this way and until 1720's he has added a padded check that caught the hammer when it returned from the string so that it won't take such a long time before he could press the same note again.

In the beginning his pianos were not accepted with much enthusiasm and it was no wonder. The instruments were still very similar to the Clavichords. The problems with playing fast and repeating notes didn't make this instrument attractive enough at first.

On 1930 Gottfried Silbermann and some other harpsichord and organ builder continued to make some of these instruments. Silbermann tried to interest Bach with this instrument but Bach didn't like it at first (He later changed his mind.)

But after the Seven Years war (1756-1763) the people started to get far more interested in pianos. Johann Zumpe has moved to England with a group of 12 people called the "twelve apostles", and there he became the first piano builder in England. 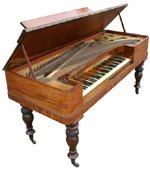 The oldest surviving pianos made by Zumpe date from the 1760s. Zumpe created compact instruments with plain casework and a simplified action that allowed for easy production and low cost. They quickly became fashionable and this demand led other instrument makers to follow. The instruments started to gain complexity with the introduction of hand stops, knee levers, swell pedals, as well as more decorative casework.

John Broadwood has made his first square in 1771. He advanced the square piano with more sophisticated actions, dampers and the replacement of hand stops with pedals. The size of the instruments began to grow to accommodate a greater range of notes. Out of desire for greater volume the thickness of the stringing increased bringing much higher tension to the pianos.
metal hitch plates were introduced to alleviate the strain, followed by full metal frames. Because of its handy size the square piano became more popular then the than wing-shaped horizontal rival, first named "grand" in 1777.

Broadwood has added a separate bass bridge in the soundboard. He added heavier strings and he used more tension while stretching them. He arranged that the hammer would strike in a distance of one ninth from the string speaking length.
Then he added half an octave in the treble, and in later half an octave in the bass. In 1783 he invented the sustaining pedal, which was used by a knee-lever that kept the dampers away from the strings. By doing that he guaranteed his place in the history of the piano.

These advantages, however, had also one a few disadvantages. Since Broadwood has used heavier strings he needed to change the action of the piano. The touch of his pianos became heavier and deeper. It was harder to play a rapid phrase. This has become the characteristics of the English action. 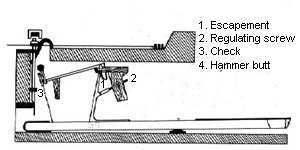 In South Germany they made their fortepianos much lighter then in England. They wanted to have a light and sparkling tone which would be handier for rapid phrases. J.A. Stein, working in Augsburg, developed an action Viennese action to match these characteristics.

The Development of the Upright Piano

Remember the "squares"? (They were actually oblong). At first they were more compact and less expensive than wing-shaped grands, and that's why they were very popular in the 19th century in the home. But since every piano maker wanted to make pianos with louder sound and with a fuller range the square pianos became larger and larger until they lost their advantage and they were eventually replaced by the upright piano.

In the Pyramid Piano the strings slanted upward from left to right, and the case above the keyboard took the form of a tall isosceles triangle.

This piano was a grand stood on end, fitted with cupboard doors and bookshelves. It had some good years until the 1820's.. Early upright grand pianos had the strings rising straight up from the keyboard. From the end of the 18th century, however, manufacturers started to bring the whole broad end of the grand almost down to the ground. In some instances, as in the case of certain giraffe pianos, the strings ran obliquely rather than vertically.
The upright piano became very popular until it took the place of the square piano in the history of the piano.

The giraffe piano was invented in Vienna and first appeared around 1798. It was mechanically like a grand piano, but the strings ran vertically up from the keyboard rather than horizontally away from it, making it a very tall instrument. These were uncommon.

John Isaac Hawkins was an Englishman living in Philadelphia. In this piano, strings ran below the keyboard with hitch pins at the bottom (unlike the pyramid piano where the strings ran up from the keyboard to the top). Robert Wornum in England built similar small uprights in 1811, and in 1842 he devised for them his "tape check" action, the direct forerunner of the modern upright action.

The Cabinet was called so because it was common to place shelves in the upper case of its case to the right of the strings. It was tall and rectangular. These instruments were so tall because the lower end of the strings, which ran nearly vertically, was about at the level of the keyboard. 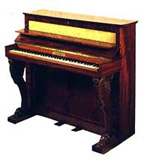 Robert Wornum has made The Cottage piano in order to create a smaller upright piano. This was not his lowest instrument.


The double escapement was the most important invention of the Sebastian Erard. Before the hammer dropped to its original resting position, it was suspended in such a way that you could re-strike a string without hitting it loud. So suddenly you had one invention that has solved two problems. You could play rapid phrases and repeating notes without a problem and you could create many new aspects in the way you produce a tone. The double escapement action ultimately became the standard action for grand pianos, used by all manufacturers.

In the middle of that century American Makers like Chickering and Steinways have made their contribution to the development of the piano. Here are some of the developments the occurred at that time.

In 1843 Chickering has made a concert grand piano with a cast iron frame and Steinways took a step further in developing the grand piano.

Three strings were used for each note instead two for all but the lower notes.

Jean-Henri Pape, a Parisian maker came up with the idea to use felt hammers in 1826. The felt hammers were softer and kept to string in tune.
The sustain pedal was invented in 1844 by Jean Louis Boisselot and improved by Steinways in 1874.

Over-stringing was invented by Jean-Henri Pape during the 1820s, and first applied to the grand by Henry Steinway Jr. in 1859. After a few developments the treble and tenor strings were placed in parallel to the outer case of the instrument and the bass strings crossed them from the front left to rear right of a grand.

In 1872, Theodore Steinway, permitted the parts of the string near its ends, instead of damping it with a cloth. The string vibrated freely, increased resonance and made the sound richer. That development is called duplex scaling.

You can say the grand piano and upright were matured instrument by 1870.In the next half century a few changes occurred but they focused more on small details in the grand casework. Square pianos were completely replaced by the upright pianos.

At the turn of the century, just when the piano had achieved prominence as the primary source of home entertainment, the movies and the phonograph appeared. The player piano, could "automated" what many piano owners couldn't play. 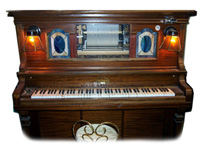 Then the gramophone and the radio took over where the player piano left off. 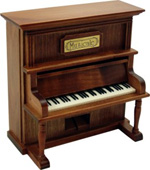 In the 1930s, piano makers introduced the miniature upright. This led to a renewed public interest.
The miniature upright was very handy but it was lacking the full and rich tone that was produces by a bigger sound box. Ths has later improved and the piano has reached unprecedented standards of quality through significant technical and cosmetic changes brought on by new materials, processes, techniques and innovative genius.

Today, piano is not as popular as it was in its good days. However in the last fifteen years people grew more interest in it as an opportunity to entertain themselves and use their free time in a creative way. The piano is a very expressive instrument which cannot be compared by any other keyboard instrument.