Learning to play the piano by ear if you'll start with these songs. These are often the most famous songs in the pop world. The ones we sang in our youth or encountered on TV.

Since the "Three Chord Songs" video lesson is quite a long one I suggest you click on "play" and then "pause" until the whole file is downloaded. Then you won't experience pauses during the time the video is played.

In the previous lesson I have thought you about the three basic chords that have three main functions in chord progression process in music.

Before I give you the list of the three chord songs I'd like to add one detail on the dominant chord. In the previous lesson we said that the dominant chord (fifth degree) is called so because of its tendency to bring us back to the tonic (first degree).

After when we checked a few examples we realized that G major could lead sometimes to F too. So how can we be certain?

Well that's what G7 is for. In order to increase the need of the dominant chord to go to the tonic an extra note has been added. The F note. So if we created the G chord by playing G,B and D now we add the F note and this is what we get.

The F note is called the seventh note. You can find it if you count one tone under the root note. We're going to discuss this issue later in detail when we speak about the blues chords. However I'd like you to know that the seventh note (F) increases the attraction toward the Tonic.

And here's a free piano chord chart of the I-V7-I that demonstrates the process between these two chords on the piano.

Bottom line, when you play a three chord song and a G chord is played before a C chord it's better play G7 to increase the tension. If not a G chord might be good enough. It depends on what you're singing basically. Listen to the sound and judge if your ear allows it or not. 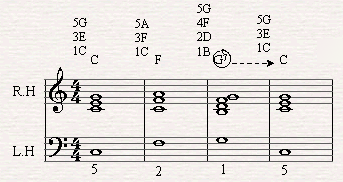 I've created this picture here of the I,IV and V chords in C major in the right inversions so that you won't have to bother to much about finding it. However if you want to play these three chord songs in an other scale you can print the file below.

And here it is. A free printable chart of the I-IV-V7 Chord progressions in all major scales. which will make it much easier for you to practice all these three chord songs.

Click here if you haven't signed to Piano Playground, our free E-zine yet. Make sure you do that in order to get the username and password codes for the free piano tabs I provide here under.

If you know other three chord songs that are not mention in this list please contact me and I'll add them immediately.

In this piano lesson I'm showing you in details how to play three chord songs by ear by what about 4 chord songs? What about songs that have more than that? Although it appears to be a big problem to be able to play song by ear it gets pretty easy to learn to do it with the Play Piano by Ear course by Hear-and-Play.

It saves you the money and time of having to go out and buy the sheet music to a song that you've already learned how to play by using the ability of your ear to recognize melodies, chords, and progressions. And what I like the most about it is that it allows you to improvise and add your own "flavor" to the song. Click here to check out the Play by Ear Piano Course by Hear and Play Now!