Alright guys, learning about the secondary dominant chord is the last issue we're going to cover before I'll show you wonderful songs that contain the chord progressions we saw in the previous piano lessons.

Let's rewind for a moment. When we started talking about harmony we discussed three main functions that created the movement in each and every chord progression.

The first degree we covered was the tonic; the point of full rest, stated by the roman letter I (C major triad chord in C major scale.) 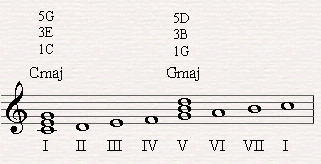 Since each piece should end with the tonic, which means we end up with a full rest, then there has to be a chord that creates tension toward the tonic. We name it the dominant and we state it as the fifth chord degree (V in roman letters).

The fifth degree serves as the most natural dominant chord (The seventh degree functions also as a dominant) since it is a stable chord, meaning that the distance between its root note and its fifth note is a pure fifth. The seventh degree has a tritone (diminished fifth) between the first and the fifth notes which doesn't allow the chord to be as stable as the fifth chord degree.

The third note of the fifth degree (If we take C major for example Then G (G, B, D) would be the dominant chord) is the leading tone (seventh note) of the scale (B would be the leading tone in C major scale) that wants to go back to the C note in the most obvious way by climbing a semi tone up to the tonic note.

Next, we have added the seventh note of the dominant chord in order to increase the tension towards the C chord. When we had a look at the major scale we saw that except from the seventh note going to the tonic note by a semi-tone, we also have the fourth note going to the third note by a semi-tone as well. (F goes to E in C major scale for example). So we created a G7 chord as the dominant seventh of C major scale by adding the F note to the G triad chord).
When moving from G7 to C the leading tone will take us to the tonic and the F note will take us to E by a semi tone.

Click here to cover this issue in details in the "Seventh Chords Page."

Bottom line? In order for a chord to be a dominant chord it has to be a major chord and prefereably a seventh chord as well. Why? because the chord progression to the next chord would be tensed enough since two of the voices will be moving by a semi-tone to the next relaxed chord.

Today we're goin to discover that we can create dominant chords to the other scale degrees as well such as the second, third, fourht etc... When we've learned about the diatonic circle chord progression we realized that the chords within a major or a natural minor scale tend to move naturally through the circles of fifths.

If the rule for creating tension is you have to drop in a fifth one can basically say that by moving from Em to Am you perform a drop of fifth within a C major scale and therefore Am could be the dominant chord of the second degree.

That's basically correct only we have to change the chord into a major chord and add the seventh note to it. It will then be a REAL secondary dominant chord. 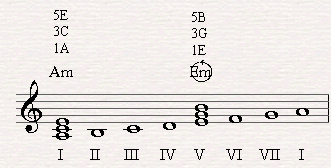 We already did this in the previous lessons when we changed the natural minor dominant of the tonic in a minor scale. Em is the natural fifth of Am in an Am scale. 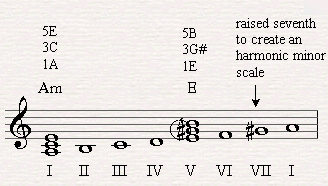 Now let's try to find the secondary dominant chords of the other scale degrees. Let's take the second degree of Am (Dm). If we go a fifth up (For we always fall in fifths) and we build the chord upon the sixth degree we get the A minor chord.

This chord however cannot function as a real dominant since it is not a major chord.
Let's raise the third note then and turn A minor to A major.
Now let's ad the seventh note of the chord to A minor to get the final chord, A7, the secondary dominant of Dm (which is the second degree of C major scale). 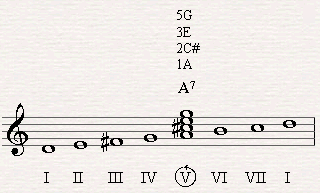 Now the thing is A7 has C# in it. But C# does not exist in a C major scale which is only based on the white keys. So we have to conclude we draw the A7 chord from an other scale. But which?
A7 is the true fifth of D in a D major scale (That has F# and C# in it) and this is where we borrowed the chord from.

To make a long story short I add here an image of all the secondary dominants of each and every scale degree in C major. I suggest you play this example until you know it by heart. It will bring you BIG returns in the future.

The reason these chords are called secondary dominants is because they're do not belong to the original scale but are borrowed from a different scale.

And here's a free piano chord chart of the secondary dominants of all major and minor scales.
The sequences are written in the major scale and if you'd like to play them in the minor scale all you have to do is start from the sixth degree.

I'm proud to tell you we're now ready to try out and analalyze many great pop songs. I'm sure you're going to like playing all these songs with the extra pleasure of understanding what you're performing. Let's go!